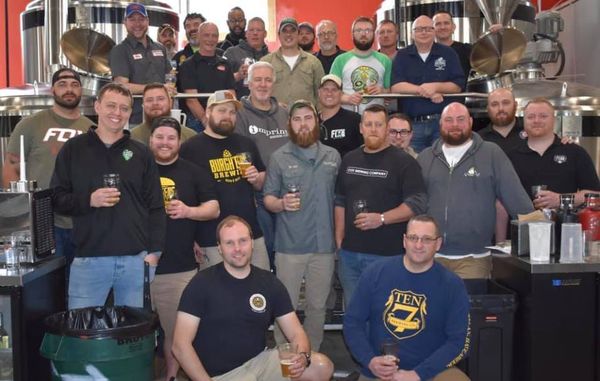 Brewers from veteran-owned breweries in Pennsylvania have collaborated on a beer due to be released in time for Memorial Day weekend, writes Sue Gleiter for Penn Live.

Twenty veteran-owned breweries, including Aston Abbey Brewing in Aston, will serve “Hurry Up and Wait,” a collaboration beer dedicated to veterans. The beer is scheduled to be released May 23 in time for Memorial Day weekend.

The double IPA was brewed in mid-April at Newfangled Brew Works in Lower Paxton Township. Owner Adam Cole donated the use of equipment, including fermenters.

The beer was brewed with 2,400 pounds of Keystone Pale, 440 pounds of Pale Oat Malt and 220 pounds of Pale Triticale from Deer Creek Malthouse in Glen Mills. The hops is a Yakima Veteran blend, a group of hops hand-selected by a group of veteran-owned breweries from across the United States.

Other veteran owned businesses – GEMS Hop Farm in Carlisle and First Sip Brew Box in Pittsburgh – participated in the collaboration.

A portion of proceeds from the sale of the beer will be donated to the Pennsylvania Veterans Foundation, which provides assistance and support to Pennsylvania veterans and their families.

Read more about the breweries that helped create this special beer here.