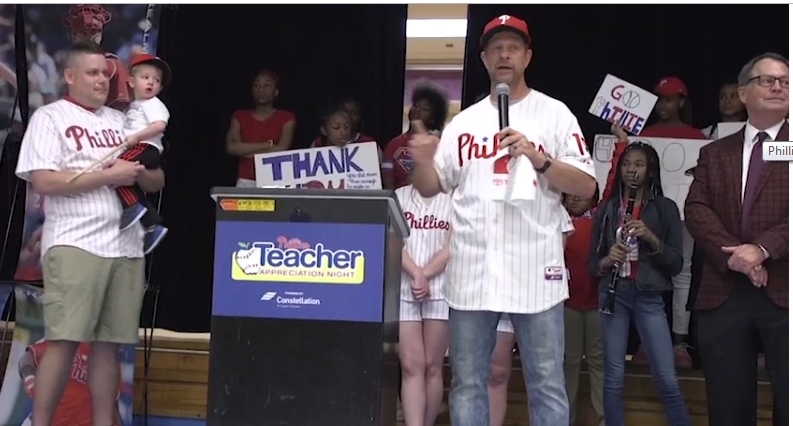 A Delaware County music teacher received the surprise of a lifetime May 3 when he was named a 2019 Phillies All-Star Teacher, writes Natasha Brown for CBS Philly.

Andrew Kruc is affectionately known as the Pied Piper of Walnut Street Elementary School in Darby, and the entire school showed their love at a surprise assembly.

“I turned into the cafeteria and I was overwhelmed,” Kruc said. “This is something I’ll never forget. Thank you, Phillies.”

Kruc was selected from hundreds of nominations and was one of 10 teachers honored on the field Friday during the 19th annual Teachers Appreciation Night at Citizens Bank Park.

Principal Joseph Williams wrote the inspiring recommendation letter that led to this honor.

“His impact and getting these kids to appreciate music and really to dig a bit deeper into their own personal gifts has just been tremendous,” Williams said.

Kruc continues to inspire his students; one drumbeat, one musical note at a time.

“Music gives students a chance to be heard when maybe they’re not heard,” he said. “Put an instrument in their hands, put a microphone in their hand, and things change for the better, sometimes forever in their lives.”