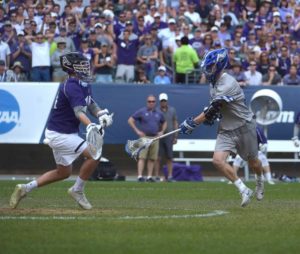 A Cabrini defense fifth in the nation did the job as the Cavaliers, Cabrini’s men’s lacrosse team, finished the season first in the nation, writes Matthew DeGeorge for the Daily Times.

The team took on the Amherst Mammoths in the NCAA Division III championship game. The concern was Lower Merion graduate Evan Wolf, who’d scored 73 goals and 42 assists this season, and who was named D3 Attackman and Player of the Year.

The Cavaliers kept Wolf to about half his season average. The Cabrini defense held Amherst to six goals, and the offensive effort out ran the Mammoths, 16-12, securing the school’s first national title in any sport.

Coach Steve Colfer has built a program with national reach but centers it on a local footprint — 17 players from Delco, about a dozen more from the greater Philadelphia area and South Jersey.

Winning it at the Linc was unforgettable.

“We stretched it as far as we could and to win it in the Linc, where you grow up coming to Eagles’ games here. It’s just a very surreal moment, winning my last game ever in this stadium.” player Bill Morgan of Marple Newtown said.