Book Review: I’ll Be Gone in the Dark: One Woman’s Obsessive Search for the Golden State Killer 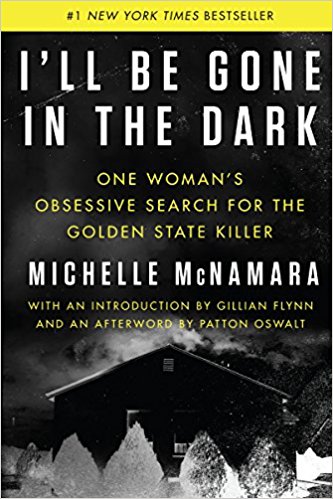 As the title suggests, author Michelle McNamara was indeed obsessed in her pursuit of the Golden State Killer. The book, I’ll Be Gone in the Dark was unfinished at the time of McNamara’s death in 2016.

There’s really two stories at work here: the unsolved crimes that took place several decades ago detailed and compiled meticulously and the author who obsessed so completely over said crimes that it eventually led to her untimely death.

Her husband, comedian and actor Patton Oswalt, recruited McNamara’s closest confidant and an investigative journalist to complete the story she had spent nearly half a decade researching and compiling. With the aide of countless hand-written notes and nearly 3,500 files on Michelle’s personal computer, I’ll Be Gone in the Dark was posthumously published in February of this year and renewed interest in the nearly 4-decade old cold case.

McNamara began to show interest in the case in 2011 when she began posting on her blog about the string of rapes and murders that were never solved. Committed in the mid-1970s and 1980s, there was a great deal known to authorities about the killer’s methods and even psychology.

“I’m obsessed, it’s not healthy” she wrote on her blog concerning the case. The posts eventually became a story for Los Angelas Magazine through which she obtained a book deal.

The crimes were committed in a time when psychics and hypnosis were common police procedure and as McNamara puts it many of them were “very solvable.”

The book reads like a good-guy/bad-guy story with McNamara’s exhaustive research into a killer’s crimes committed in California’s sprawling suburbs from the mid-1970s to mid-1980s and her detailed accounts of the crimes committed.

If you’re a fan of true crime novels I’ll Be Gone in the Dark is an in-depth look at unsolved crimes by an author who is probably just as, if not more obsessed with the grisly subject matter as you are. In a bit of redemption for the efforts of McNamara, the Golden State Killer was finally caught on April 25th of this year.

TechnologyIt Was Malware That Took Down Delaware County Computers. Security Gets an Upgrade.December 4, 2020