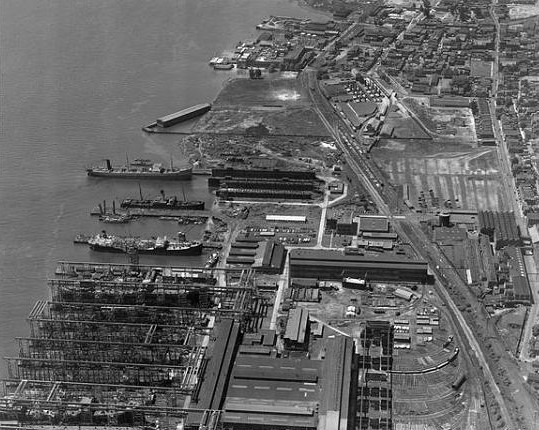 Aerial view of Sun Shipbuilding & Drydock in Chester via Wikipedia.

October 30 marked the centennial since Sun Shipbuilding & Drydock launched its first ship from the Chester yard, writes Colin Ainsworth for the Daily Times.

The Chester Sun was the first ship of many to be produced at the yard. At the time, it accounted for 40 percent of U.S. tanker production in World War II, and began nearly seven decades of innovation in ship construction.

The company, now known as Sunoco, has shaped Chester for decades. However, after 66 years in business, the shipbuilding arm was sold to Livingston Industries, which closed its successor, Pennsylvania Shipbuilding, in 1989. The site was acquired by Metro Machine in 1993, and it lasted until 2001.

To ensure that the memory of the once-great shipyard is preserved, Dave Kavanagh founded the Sun Ship Historical Society in 2000. He has since been working on cataloguing materials about the shipyard at the Delaware County Historical Society, Independence Seaport Museum in Philadelphia, and the Hagley Museum in Delaware.

“It was a badly needed organization that fulfilled a great need for the purpose that it was built,” said R. Anderson Pew, a member of Sun Company and Sun Ship’s founding family.

Read more about the shipyard’s history in the Daily Times by clicking here.