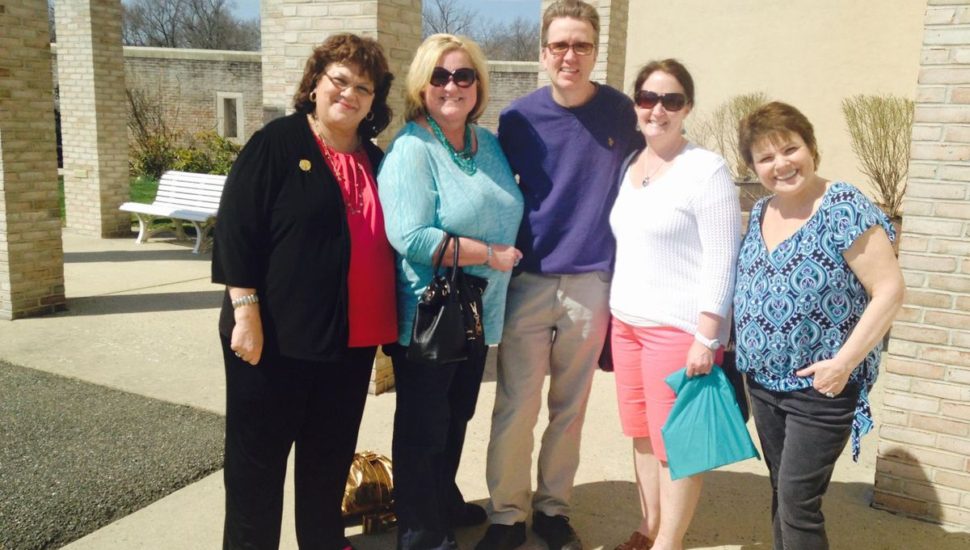 Paul Walsh, center, of Ridley Park recently revisited the National Centre for Padre Pio. The Saint lifted him out of his vegetative state after a car crash in the 1980s. Image via Peg DeGrassa, Delaware County News Network.

Betty and Paul Walsh of Ridley Park recently revisited the National Centre for Padre Pio in Barto, near Berks County, as they believe the saint miraculously lifted Paul out of his vegetative state after a car accident three decades ago, writes Peg DeGrassa for the Delaware County News Network.

Paul was 17 and attending St. James High School in Chester in the 1980s, when he slammed his car into a telephone pole on Chester Pike. His already-serious condition worsened a day later when he slipped into a vegetative state.

To help, Paul’s mother Betty and his father Joe started praying, imploring all their family and friends to pray with them. Among the prayer cards Betty received was the one for Padre Pio, the Italian Capuchin priest who died in 1968 and was later canonized as Saint Padre Pio.

She started praying to Padre Pio, and soon after, Paul began to recover and was soon back to normal, stunning his doctors. Interestingly, the Walshes later found out that the first person to respond to Paul’s crash had also prayed to Padre Pio, and dedicated him to the Saint.

Read more about the miracle from the Delaware County News Network by clicking here.

Weekend Wanderer: Getting ‘Stuck’ with a Christmas Tree

What If MLK Had Social Audio for “I Have a Dream”?

Here's How Our Area Looked When the Lenape Lived in Philadelphia