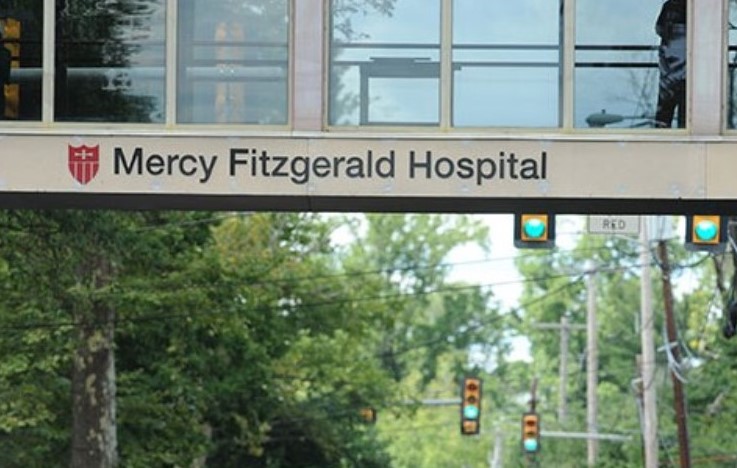 Each year, more than 100,000 Americans suffer life-threatening pulmonary embolisms — otherwise known as blood clots in the lungs — often resulting in death or disability.

Recently, three days after a 34-year-old woman walked into Mercy Fitzgerald Hospital for extreme shortness of breath caused by two life-threatening blood clots in her lungs, she walked out on her own following an innovative therapy.

A new, catheter-based procedure to deliver clot-busting drugs, now performed by cardiovascular specialists at Mercy Fitzgerald, made the difference.

After a recent ankle trauma, the patient could barely walk and had difficulty breathing. When she arrived at Mercy Fitzgerald Hospital’s Emergency Department, doctors discovered she had blood clots in her leg, causing severe swelling and pain. A CT scan also revealed that some of the clots had traveled from her injured ankle to her lungs.

To treat this life-threatening condition, Mercy Fitzgerald Hospital called upon its multidisciplinary team of interventional and diagnostics cardiologists and radiologists, emergency department physicians, critical care physicians, and pulmonologists. The team determined she was a good candidate for the new procedure, which uses a catheter to deliver clot-busting drugs directly to the site of the embolism in the lung.

This patient was the first at Mercy Fitzgerald to undergo this type of intervention.

Pulmonary embolisms that cause severe symptoms are traditionally treated with anticoagulant drugs administered to prevent new clots from forming while the body dissolves the existing clot. This process often takes months to complete, and in some patients, the clot does not fully dissolve or the patient has damage to the blood vessels in the lung.

However, using a catheter threaded through the pulmonary artery to the exact location of the clot to administer a clot-busting drug is a major advancement in the management of severe pulmonary emboli, as it allows near-instantaneous resolution of the clot.

The team removed the catheter delivering the drug therapy after 12 hours, and, after just a 24-hour monitored stay in Mercy Fitzgerald Hospital’s ICU, the patient was well on her way to recovery.

“More and more centers are looking to prevent long-term hypertension and other complications that can occur after traditional treatment of pulmonary embolisms,” said Dr. Dominic J. Valentino, Medical Director of Critical Care at Mercy Fitzgerald Hospital. “Catheter-directed thrombolysis gets our patients up and walking in hours, and helps advance the recovery process.”

Opioid Settlement Funds Will Move Quickly to Where They Are Needed, Officials Promise