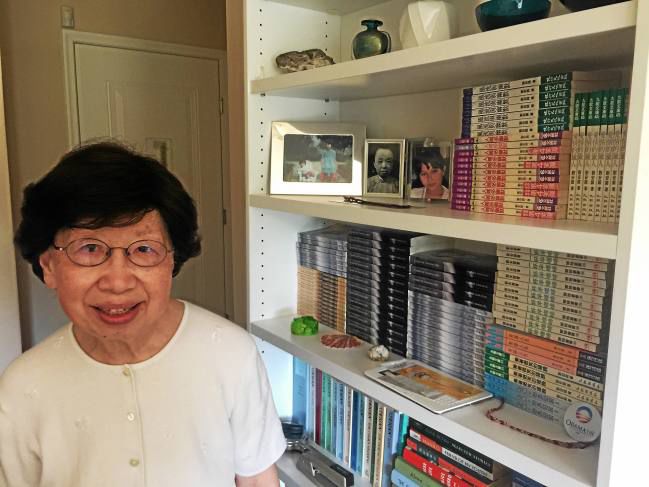 After a life of journeying and writing, Wallingford’s Annabel Annuo Liu is chronicling her story in a series of memoirs. Image via Peg DeGrassa, Delaware County News Network.

She fled from two world wars, immigrated to a foreign country, and became a well-recognized voice for Chinese Americans.

Now in Wallingford, Annabel Annuo Liu is chronicling that eventful journey with her third book in an autobiographical series of her life and her 11th overall book.

The senior living resident of Plush Mills just released When Chopsticks Meet Apple Pie, which tells of Liu’s “travels, issues of food and drink between vastly disparate cultures, and the struggles of bridging generational and cultural gaps within the family” through essays and short stories, according to a Media Town Talk report by Peg DeGrassa.

The new book adds to her memoirs Under The Towering Tree and My Years As Chang Tsen: Two Wars, One Childhood.

After journeying from Shanghai, China, to Taiwan and then America, Liu became a journalist and rose to prominence with the nation’s largest Chinese-language newspaper, the World Journal.

“I wrote eight books in under 20 years,” she said. “My books have all sold well, with millions of readers enjoying my writing. People tell me that they like to read my books before they go to sleep because they laugh, and the humor puts them in a good mood before sleeping.”

Liu moved to Wallingford nine years ago to be near her daughter in Swarthmore.

“Being an author is absolutely wonderful,” she said. “I can sit here at my computer, and my mind can take me and my readers all over the world to experience all sorts of unforgettable drama, experiences, and adventures.”