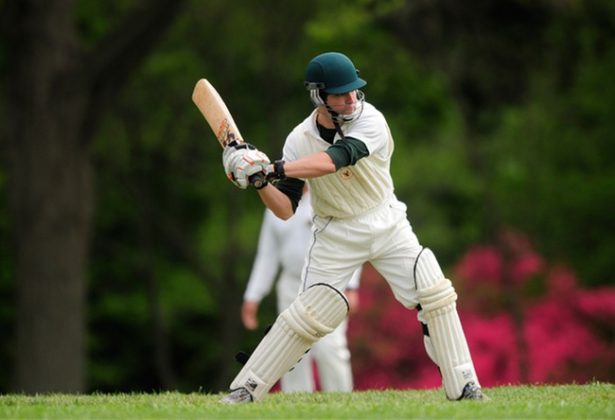 When back injuries threw him a curveball, Nate Rolfe turned in a baseball bat for a cricket bat at Haverford College. Image via the San Marino (Calif.) Tribune.

Four back surgeries and two spinal fusions have finally put Haverford College junior Nate Rolfe back on the field — just not the same field he started on.

Rolfe grew up in California playing baseball, but multiple back injuries threw him a series of curveballs.

Now at Haverford College, he’s finally learned how to hit those curves — but with a cricket bat instead of a baseball bat, according to a San Marino (Calif.) Tribune report by Mitch Lehman.

“I hoped that the different movements in the sport would be better tolerated by my back and that I would be able to capitalize on the hand-eye coordination I had developed playing baseball,” Rolfe said.

It didn’t happen immediately, but Rolfe has endured and “been able to return to the cricket pitch, and played this last season in the least amount of back pain that I have been in since the age of 12,” he said.

Despite cricket’s worldwide popularity — the sport is second only to soccer — Haverford has the only varsity cricket team in the country.

“I am as excited now about cricket as I am about baseball,” he concluded.