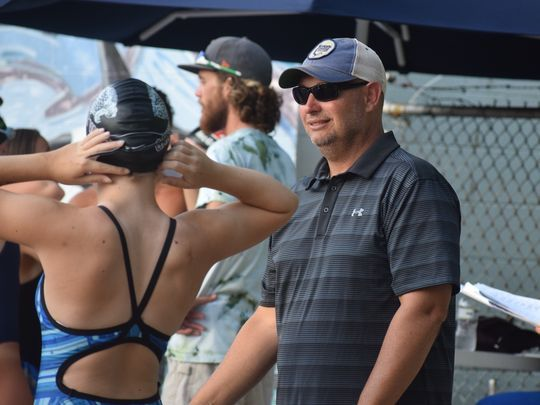 Garnet Valley coach Clark Bickling just made a big splash with his 100th straight win with the Silverside Swim Club. The feat spans 20 years. Image via the Wilmington News Journal.

His winning streak just splashed across the milestone of 100 swim meets, and it now spans 20 years.

But it’s not the trophies that coach Clark Bickling hoists up; it’s the lives of his swimmers.

“It’s not about the winning for him,” said his wife, Ashley Bickling, in a Wilmington News Journal report by Alonzo Small. “It’s never about the winning. It’s about building kids and their character, so they go on to be good people.”

The swimming coach at Garnet Valley High School and the Rocky Run YMCA in Lima notched his 100th win with the 211-member summertime Silverside Swim Club of the North Brandywine Swim League.

Instead of focusing on winning, Bickling has built his swim program around encouragement, sportsmanship, and support.

“Some of my best friends are guys that I swam with, and some of these guys are going to be best friends forever,” Bickling said. “It’s more than just swimming; it’s a community.”