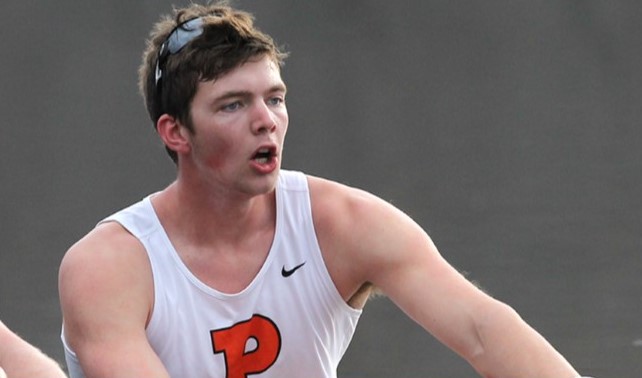 Despite a late start in the sport, Episcopal Academy graduate Nick Mead rose to captain of the Princeton University rowing team. Image via Princeton Athletics.

He got into the boat later than most rowing athletes, but that didn’t stop Strafford native Nick Mead from making waves in high school and college rowing.

The Episcopal Academy alum just concluded his college rowing career as captain of the Princeton University Varsity 8, according to a Town Topics report by Bill Alden.

“I try to play into my strengths, leading by example,” Mead said. “I tried to do a lot of extra work and quietly push guys in the right direction. I also had the help of a great senior class, so I rely on those guys a lot too.”

He capped an impressive collegiate career by rowing just short of his third bronze medal at the Intercollegiate Rowing Association National Championships in Sacramento. It was quite the rise from a high school freshman just starting the sport. Along the way, Mead won the 2013 Scholastic Rowing Association of America title and was invited to the men’s U.S. 8+ team for the 2013 Junior World Championships in Lithuania.

“At that point, I was still pretty rough around the edges,” he said.

While he plans to continue to row, Mead credited the Princeton rowing team with a key role in the formation of his identity.

“Rowing has been the defining experience of my Princeton career,” he said.