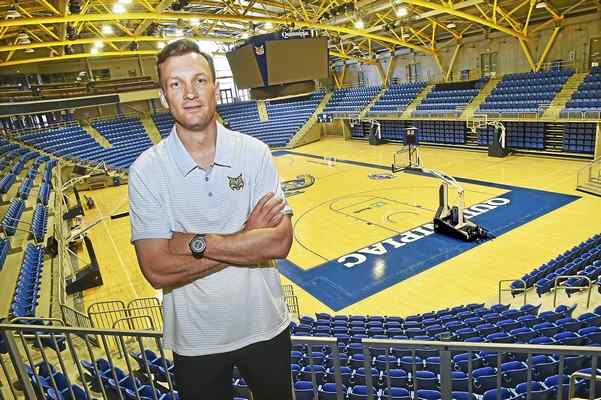 After growing up on the side of NBA courts and rising as a coach at Villanova, Baker Dunleavy is now at Quinnipiac carving out his own path. Image via Catherine Avalone, Hearst Connecticut Media.

He’s lived in the shadow of the former NBA coach he calls his father, as well as Jay Wright, Villanova’s media darling of a coach.

But now, Baker Dunleavy is taking his first shot at head coach, at Quinnipiac University in Hamden, Conn., according to a New Haven (Conn.) Register report by David Borges.

“If he was a stock, I’d be buying him. He’s gonna have a great future,” said his father, Mike Dunleavy Sr., the current coach at Tulane. The elder Dunleavy once coached Magic Johnson and the Los Angeles Lakers, as well as three other NBA teams, over the course of 17 years.

Baker Dunleavy, who played sparingly at Villanova, became an assistant and associate head coach for the Wildcats, culminating in the 2016 national championship.

“Obviously, when you talk purely basketball, you can’t get much more fortunate than to attend NBA practices growing up,” he said. “That’s kinda like your Saturday with your dad: go to work, and instead of going to an office, you’re going to a practice facility or to a game or on a road trip. So, that part of it is so unique.”