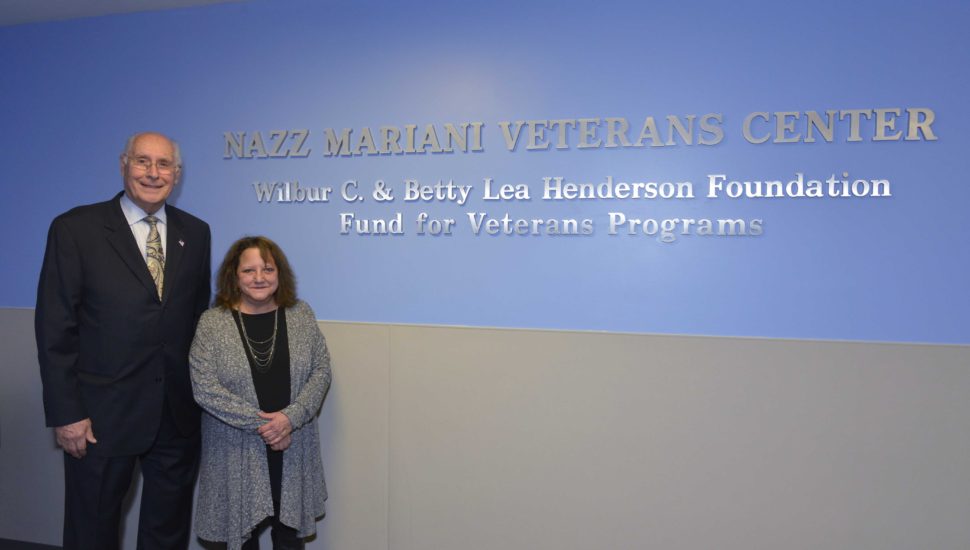 The center was made possible by gifts from Pam Mariani, former general manager of the Edgmont Golf Club, and the Wilbur C. and Betty Lea Henderson Foundation, the mission of which is to support education and veterans.

At the opening, Mariani shared memories of her father, Nazz Mariani, who served in the Pacific Theater during World War II. Naming the center allowed her to honor him, not only for his military service, but also for his active community involvement in Delaware County.

Mariani’s gift provided for capital expenditures in the center, including a POW/MIA table, representing the absence of prisoners of war, or those missing in action, a tradition that has been in place since the end of the Vietnam War.

William Taylor, executive director of the Wilbur C. and Betty Lea Henderson Foundation, shared memories of Wilbur C. Henderson, founder of The Henderson Group, a developer and owner of commercial and industrial real estate, with offices in Media and elsewhere. The foundation’s grant will support activities and events for veterans, such as a presentation by Shannon Rusch, a Navy SEAL and motivational speaker, who spoke prior to the grand opening.

The new center will provide opportunities for veterans to develop camaraderie and support networks with fellow veterans.

“The College has always had a commitment to veterans, but now we can do more to support them,” said Kathleen Breslin, vice president for Institutional Advancement and executive director of the college’s Educational Foundation.

“Both the new center and the fund for special events and activities will serve to better engage our student veterans in the life of the college and in their academic pursuits,” he said.