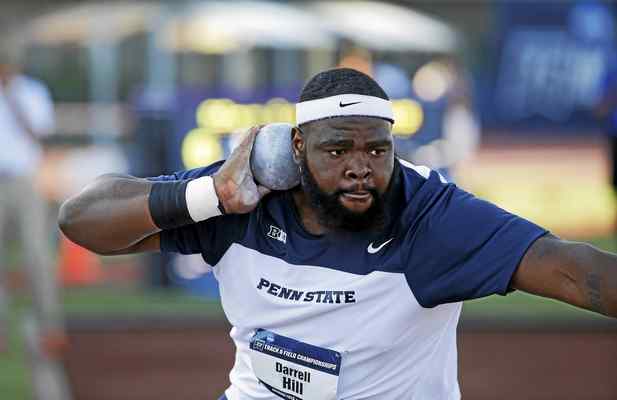 The 6-foot-3, 320-pound Hill – a 2015 graduate of Penn State who started his collegiate career at the University of Houston – punched his ticket to Rio with a recent third-place finish in the shot put at the U.S. Olympic Track & Field Trials in Eugene, Ore.

The 22-year-old adds to Penn Wood’s distinguished legacy of track and field. Lansdowne’s Leroy Burrell, a 1985 Penn Wood graduate, twice held the title as Fastest Man on the Planet, as he twice owned the world record in the 100-meter dash.

Burrell won a gold medal at the 1992 Olympics in Barcelona as a member of the U.S.’s 4×100-meter relay team. His sister, Dawn Burrell, a long jumper, represented America at the 2000 Olympics in Sydney.

Hill is joined on the Olympic team by his college teammate and fellow Pennsylvanian, Joe Kovacs. Kovacs grew up in Nazareth and attended Bethlehem Catholic High School.

Hill – who also competed in football, basketball, and wrestling in high school – earned first-team All-America honors as a senior with the Nittany Lions, finishing second at the NCAA Championships on a tie-breaker.

He is also a two-time Big Ten and Penn Relays champion.