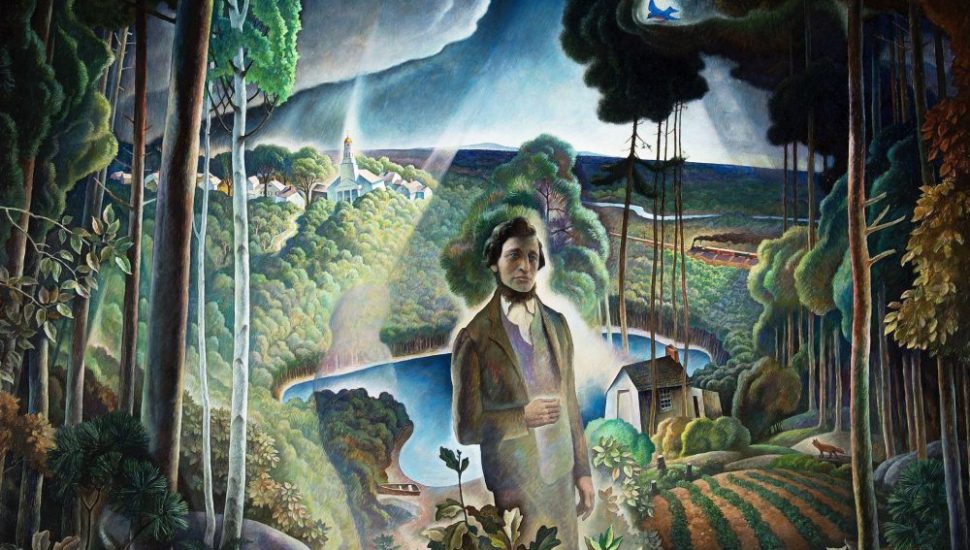 N.C. Wyeth, the great American illustrator who spent his adult life in Chadds Ford, turned increasingly toward the writings of Henry David Thoreau as his success began to disappoint him, writes Sebastian Smee of the Boston Globe.

Wyeth’s work had appeared on covers of national magazines, and he had a huge following, tons of commissions, a house, studio, wife, and kids.

According to Smee, however, something was missing from his life, and Wyeth believed Thoreau had identified it.

The manifestation of Wyeth’s obsession with Thoreau is now on display at the Concord Museum in Massachusetts, in an exhibition of original paintings, “N.C. Wyeth’s Men of Concord.”

“Wyeth had been reading Thoreau for a decade when he pitched the Boston publishing firm Houghton Mifflin with the idea of producing an illustrated volume of Thoreau’s journal entries,” wrote Smee.

Houghton Mifflin, already established as the premier publisher of Thoreau, had agreed, but Wyeth had delayed and delayed. It almost seems he cared too much.

The publishers he worked for, Wyeth complained (echoing Thoreau’s lament, in “Walden,” of the laboring man who “has no time to be anything but a machine”), “want to buy me piecemeal, and in searching for the best they get the worst, because they push and prod.”

In 1920, Wyeth delivered a paper, “Thoreau, His Critics, and the Public.” In it, he defended his hero against those who saw him as a charlatan, a crank, or a “mere” naturalist. He longed, secretly, to import some of the integrity he found in Thoreau into his own life.

For the first time in nearly eight decades, the Concord Museum show brings together all 12 of the large paintings Wyeth produced for the book, along with eight related drawings by his 19-year-old son, Andrew. These were dispersed throughout the text in ways that suggested Thoreau’s own sketches in his journals.

Click here to read more about N.C. Wyeth’s obsession with Thoreau in the Boston Globe.