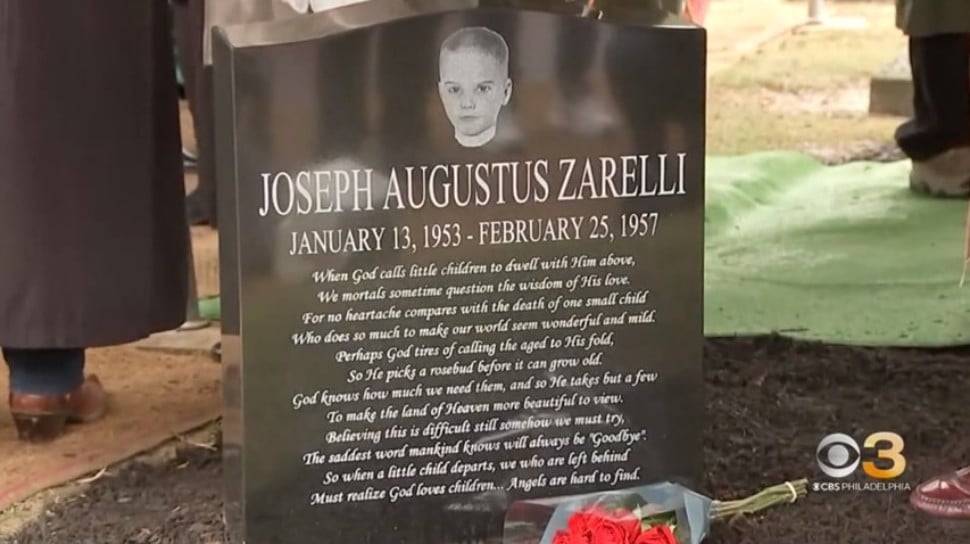 A headstone at Ivy Hill Cemetery in Philadelphia is finally in place for Joseph Augustus Zarelli, once known only as the “The Boy in the Box” following a dedication ceremony Friday.

CBS Philadelphia is reporting that the paternal side of Zarelli’s family has recent roots in Broomall and other parts of Delaware County, and has deep roots in West Philadelphia and Overbrook, especially at Saint Donato Parish.

Zarelli was identified through DNA by Philadelphia investigators last month as the 4-year-old victim in the 1957 case.

His body was found in a box in Fox Chase in February 1957 and the case has remained unsolved.

CBS Philadelphia is reporting that Zarelli’s biological mother and father are deceased.

Surviving family said they never knew about their relationship to the victim until police contacted them last month and said they were related to Zarelli.

One family member, who asked not to be identified, said they are mourning for Zarelli and wanted to be there Friday.

They have asked investigators to continue to figure out what happened to the young child as they look for closure.

Read more about the headstone dedication for Joseph Zarelli at CBS Philadelphia.

With the Boy in the Box ID’d, Internet has Lit Up with Speculation