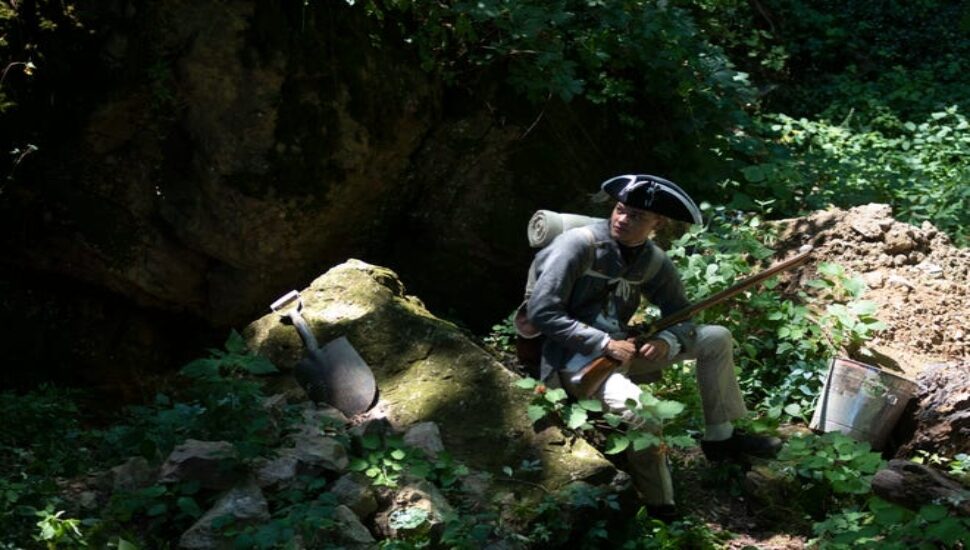 Image via Nur B. Adam, Bucks County Courier Times.
An actor sitting outside of the cave the infamous Doan Gang allegedly used as a hideout.

A Bucks County filmmaker is currently working on a series covering the exploits and history of the Doan Gang, a group of British spies who committed crimes throughout Bucks County during the Revolutionary War. Sarah Siock wrote about the upcoming film project for the Bucks County Courier Times.

Mark McNutt, a filmmaker and Doylestown native, became interested in the Doan Gang at a young age. Tales of the gang of Quaker brothers have made the Doan Gang a popular local legend to Bucks County residents.

“What makes the Doan Gang story exciting is the myth of war. It’s the idea that this is the greatest American story never told,” said McNutt.

McNutt is currently working on two projects about the gang. A documentary series called “Outlaw Treasure” is currently in the works, as well as a scripted drama series, “America’s Original Outlaws”. The latter series will be filmed on location in Bucks County; there is a cave in the Doylestown area that the group allegedly used as a hideout when they weren’t stealing horses or committing robberies.

The projects will give viewers a more in-depth look at the lives and crimes of the gang.

‘There Are a Lot of Stories Out Here’: West Chester Man’s Volunteerism Preserves the Past at Abandoned Cemetery

Secret Cave Found That Was Hideout for Revolutionary War Outlaws