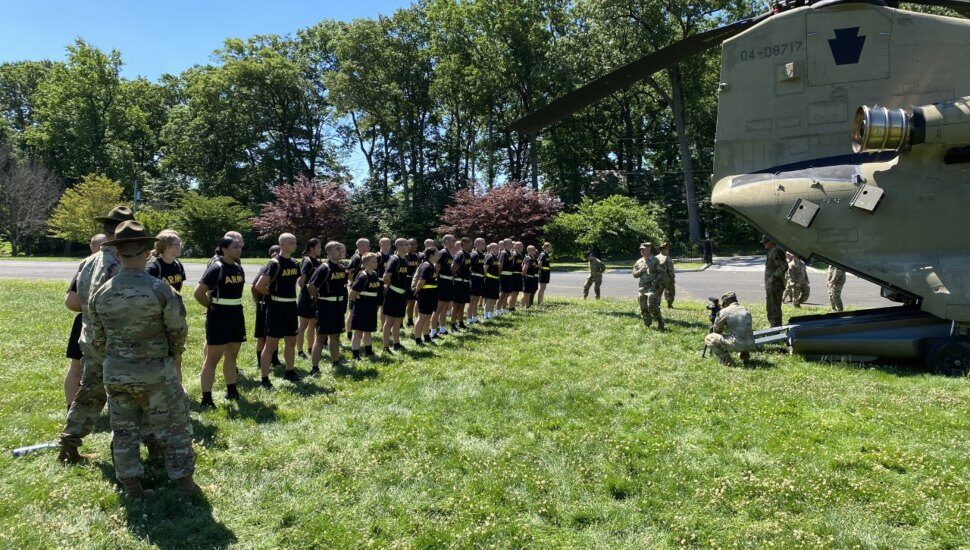 Image via Department of the Army.

Qualified students from Valley Forge Military College had an opportunity to get an insider’s look at a CH47 Chinook helicopter as part of a week-long June session on the Wayne campus.

The students are part of a two-year early commission scholarship program, which gives them a free education at Valley Forge and the opportunity to become a 2nd Lieutenant at the end of their sophomore year, according to a U.S. Department of the Army release.

The program got underway during the June session when participating students completed the Army Combat Fitness Test, Combat Swim Test and a ruck march.  They also practiced drills, ceremonies and cadences.

A highlight of the week is a fieldcraft experience. This year, the CH47 Chinook, a tandem rotor helicopter, landed on the school’s parade ground.

Students sat in the helicopter and asked the pilots and maintenance crew questions about their career paths and helicopter mechanics.

Students also had access to a wrecker, a high-mobility multipurpose wheeled vehicle (HMMWV or Humvee) and the specialists that use and maintain these vehicles.

The week of activities is often the student’s first Army experience. Ultimately, it prepares them for 32 days of basic training camp at Fort Knox in Kentucky.

Selected students can decide if they want to be part of the Army Reserve or the Army National Guard. They can choose a specialty that includes medical, transportation, engineering and civil affairs.

Find out more about Valley Forge Military Academy and College.