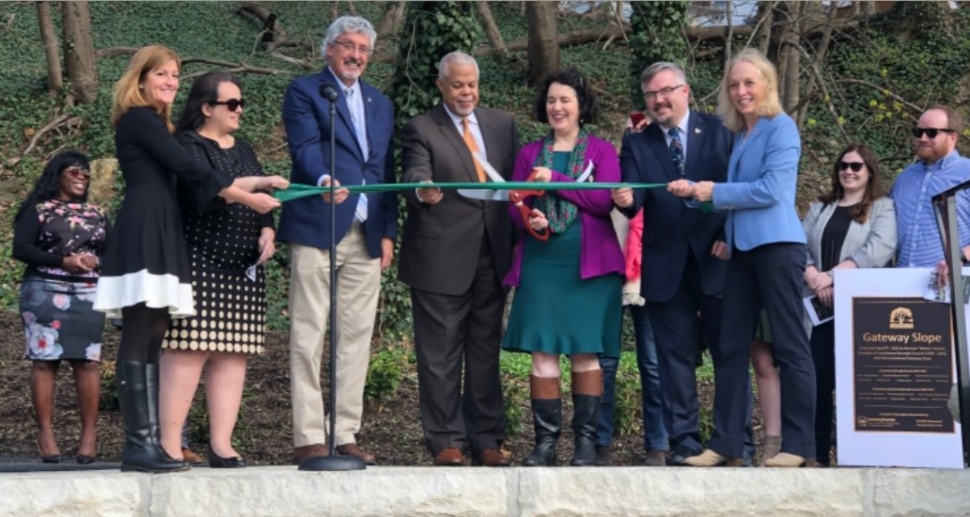 Image via submitted photo.
A ribbon cutting ceremony for the new Gateway Slope walkway in Lansdowne.

The Gateway Slope walkway officially opened in Lansdowne Borough this week, part of a continuing effort to provide park and nature trail access to the Delaware County and Lansdowne community, writes Peg DeGrassa for the Daily Times.

Lansdowne Borough Council and Mayor Magda Byrne celebrated the opening of the walkway this week, with a dedication ceremony to Norman “Marty” Council, who was instrumental in the land purchase that made the Gateway Slope project possible.

The project is a collective vision at the federal, state, county and local levels to create assessable trails and parks.  Lansdowne received two grants totaling $600,000 to make the pedestrian trail possible.

Delaware County Council Vice Chairman Elaine Schaefer said the walkway, an extension of the Hoffman Park trail, connects the Darby Creek Trail to Hoffman Park and to neighborhoods in Lansdowne.

The new trail extension connects to the existing trail at the southeast corner of Scottdale and Baltimore Ave. with Eldon Road at Baltimore Avenue.

Read more at the Daily Times about the Lansdowne Borough Gateway Slope walkway.

Here is a photo montage showing the construction timeline of the Gateway Slope project in Lansdowne.

1 of Philadelphia's Most Exciting Suburbs is in Delaware County