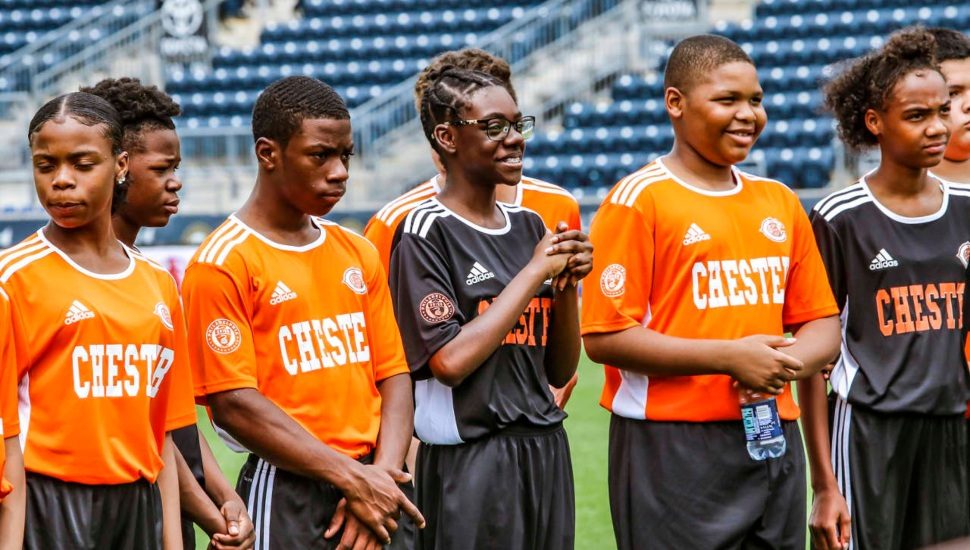 Dace Bell, Sean Flannery, Ava Irwin, and Riabene Troilo worked the crowd at each match, selling 50/50 raffle tickets in parking lots, the stadium, and corporate suites. Half of the money collected went to one fan at the game. The other half was donated to the Philadelphia Union Foundation.

The foundation’s mission is to return soccer to Chester. It supports the building of mini-pitches to introduce youngsters to soccer, and the creation and ongoing operation of new boys’ and girls’ soccer teams at Chester High School, which has been without soccer for 30 years.

“I was able to reward the students’ volunteerism during the season with paid fundraising opportunities in the playoffs, including incentives to raise as much as they could,” explained Paul Howard, executive director of the foundation. “Each of the four surpassed their targets at least once, refining and improving their fundraising techniques as they grew. In the final game of the season, we raised the highest single-game jackpot in my three seasons at the club, $15,720.”

Troilo values her experience with the Union. “One thing that I learned is that, when you do things that may be out of your comfort zone, you can make a difference not only in your life but in someone else’s. I grew up playing soccer, and I am glad knowing that half of the contributions I raised will make a difference in a young athlete’s life.”

Bell agrees. “The fact that all the money we were raising would help other people made this experience extremely enjoyable and memorable.”

Irwin learned about the behind-the-scenes operations and what it takes to run a stadium on game day. “I also really enjoyed working in such a friendly environment, and it solidified the fact that I would love to work for a professional sports team in my future.”

Julie Lanzillo, director of the Sport Management and Sport Business programs at Neumann, credited the students’ insight and savvy in taking advantage of the foundation’s offer. “The students see the downstream effect of an opportunity like this,” she said, “building relationships and soaking the most out of any experience. These are students who will rise to the top because they understand that.”

As the faculty member who arranged the opportunity for the students, she was also pleased with the concrete results. “They did real work. They raised a specific amount of dollars. That’s a quantifiable accomplishment now on their resumes.”

Lanzillo has worked with the sales office at the Union for five years. Her spring Sales class partners with the team to sell tickets, and several Sport Management alumni are currently employed by the Union.

Howard was so Impressed with these four Neumann students that he is actively recruiting even more. “I would like ten more Neumann students to join our team and become fundraisers during the 2022 season,” he said.

Find out more about Neumann University.

A Neumann Graduate Is Now a Harlem Globetrotter