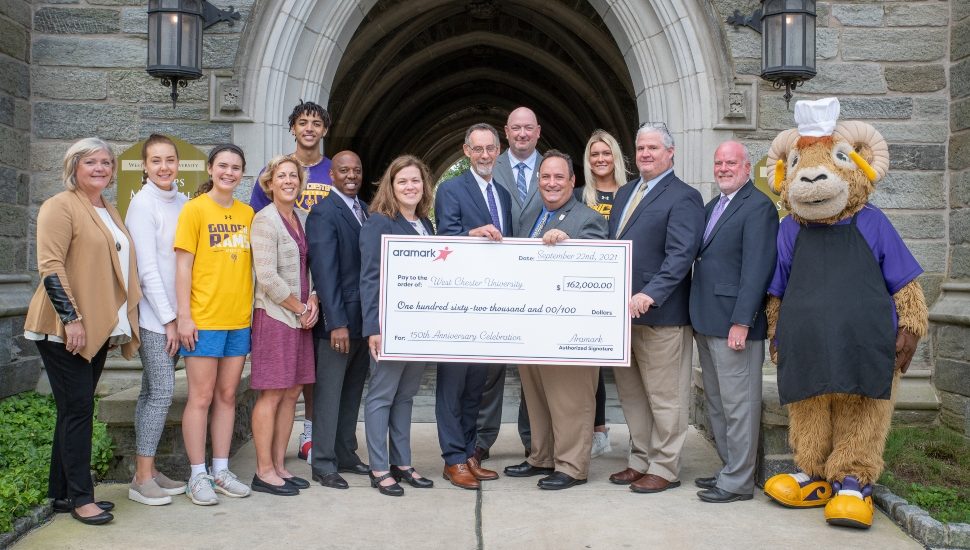 West Chester University students experiencing food insecurities, including those who are student-athletes, will benefit greatly from a generous gift of $162,000 from Aramark that was recently presented to WCU President Chris Fiorentino.

In addition to its $112,000 philanthropic support of WCU students, Aramark, which is currently the presenting sponsor of the university’s Sesquicentennial Celebration, presented the check to also support five WCU 14 meals-per-week plans ($14,000), food donations for Sports Nutrition Fueling Stations ($16,000), and funding to support a graduate assistant position to manage Sports Nutrition Fueling Stations ($20,000).

The donation was the largest single gift made to WCU by Aramark, which provides food service, facilities, and uniform services to hospitals, universities, school districts, stadiums, and other businesses around the world. Those participating in Wednesday’s check presentation included:

The much-needed gift comes at a critical time in WCU students’ lives. In survey data collected last year, approximately 40 percent of WCU students reported experiencing some type of basic needs insecurity, including not having enough food to eat.

“For more than 30 years, Aramark has partnered with WCU to provide nutritional and educational opportunities for Golden Rams,” said Fiorentino. “On the occasion of West Chester University’s 150th anniversary, our students are able to benefit from the continued generosity of a company that recognizes the dangers of food insecurity and the importance of access to healthy food choices. As a presenting sponsor of the university’s Sesquicentennial Celebration, Aramark’s assistance provides the priceless essentials that our students need to nourish their minds while fueling their lives. We are deeply grateful to this important partner.”

West Chester University is committed to student success at every level of the college experience, including athletics. For student-athletes, nutrition is one of the key components for achieving optimal health and athletic performance. The Sports Nutrition Education and Fueling Program helps more than 100 student-athletes each semester. Under the supervision of Professor and Chair of the Department of Nutrition Christine Karpinski, an exercise physiologist and registered dietician, a combination of undergraduate students, graduate students, and dietetic interns provide nutrition education to student-athletes, including one-on-one consultations, individualized meal plans, team talks, and Q&A sessions. They also conduct research in these areas.

“Aramark is proud to be the presenting sponsor of WCU’s Sesquicentennial Celebration,” said James Hess, Resident District Manager, Higher Education, Aramark. “Through this sponsorship and our philanthropic support of the university and Student Affairs, we are able to create opportunities for students and the local community. As we foster accessibility to food and build community relationships, we look forward to a bright future.”

Find out about Banana Day at West Chester University.