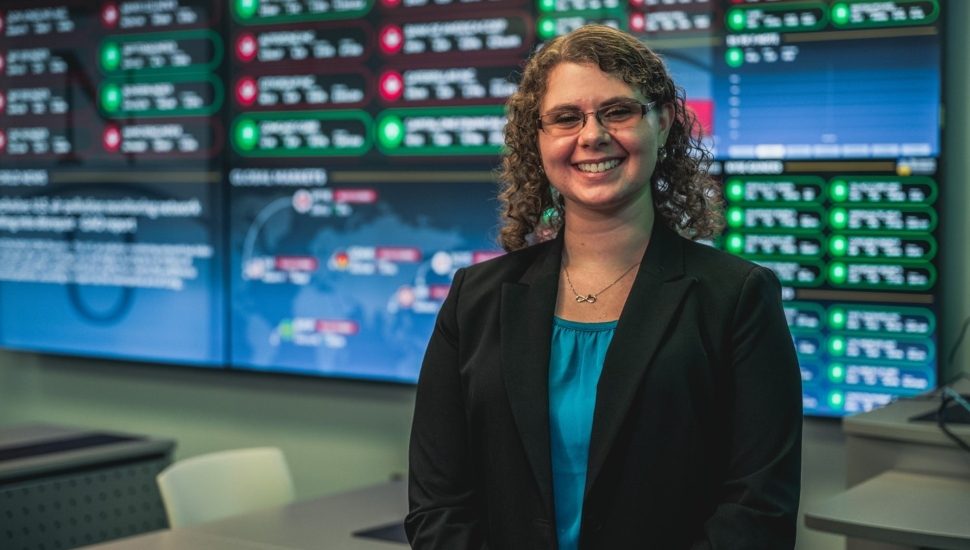 Amanda DeCarolis, a Business Administration major, has been named valedictorian of the Neumann University class of 2021.

She also minored in HR and Strategic Communications.

She led a three-student team to a top-50 finish in the Business Strategy Game, an international business management contest that involved 2,968 teams from 164 colleges.

Arriving to the Neumann campus in 2017, she has dived into a host of activities and volunteer opportunities.

She most enjoyed Neumann Media, serving as an anchor and field reporter for the weekly Neumann Update broadcast. She also played clarinet in the University Jazz Band, with practice being the highlight of her week.

“Neumann Media was a good pairing with my major,” she explains. “I was shy when I first arrived on campus and being on camera pushed me out of my comfort zone. It helped me develop the presentation skills that I’ll need for business, too.”

She was a Presidential Ambassador, and retreat leader for Campus Ministry.

DeCarolis also volunteered for the university phon-a-thon and at the St. Francis Inn, a soup kitchen in the Kensington section of Philadelphia.

Called to help individuals reach their full potential, she is looking for a job in human resources and talent management.

She calls attending Neumann University “the easiest choice I ever made,” explaining that she was drawn to the university’s traditions and atmosphere after taking a virtual

After visiting in person on her 18th birthday, she was convinced that Neumann would be the perfect fit.

“I was more excited to come here than I was to turn 18,” she confesses. “I Neumannized my car with clings and stickers, and I didn’t apply anywhere else.”

“Everyone here treats you like a person and knows your name. You’re not a number.”