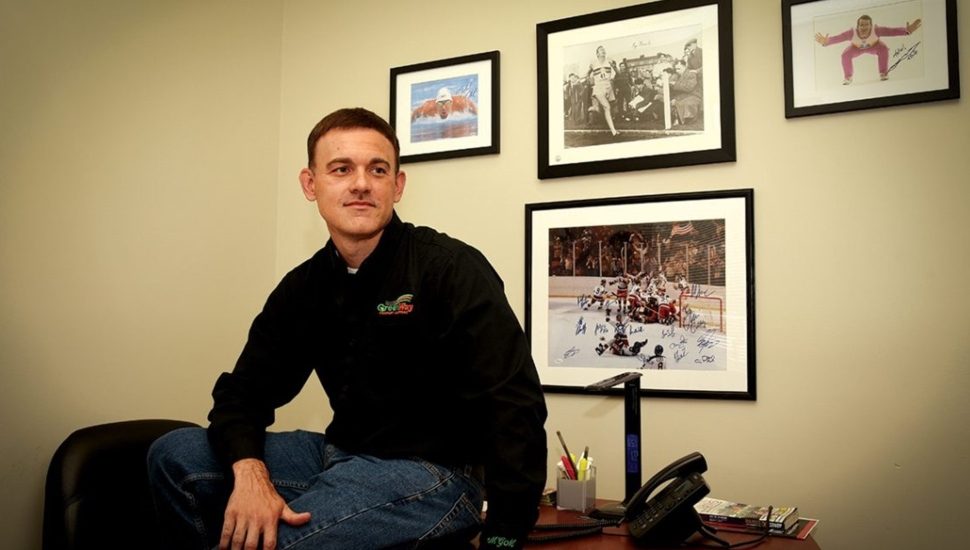 Until last year, Michael Mendick was self-taught, the bulk of his education coming from real-world experience and books on tape (“Automobile University,” he calls them).

He devours the books while driving 70,000 miles a year covering a three-state area for his HVAC company. As a result, he peppers his conversation with quotations from self-improvement gurus like Dale Carnegie, Tony Robbins, and Zig Ziglar.

Coming from most people, the quotes would be mere bromides. But Mendick delivers them with a conviction that can’t be denied. And they have served him well, continuing to inform his life.

But in 2019, he detoured from the road of self-education, and it brought him to Wilmington University. It resulted from a vow he made 18 years ago when his first child was born.

“I promised myself then that I would get a college degree by the time my daughter graduated from high school,” Mendick said. True to his word, he received an associate in Liberal Studies from WilmU in May.

He has found the academic world much to his liking. Attacking it with his characteristic dedication, he plans to earn as many as four WilmU degrees.

Mendick’s journey to higher learning took several turns after he graduated in 1999 from William Penn High School in New Castle, Del. At William Penn, he was an accomplished athlete, excelling in football and wrestling.

His parents divorced when Mendick, the oldest of four brothers, was young. Thus, he said, “My coaches were like father figures to me. They taught me work ethic, overcoming adversity, no excuses, how you conduct yourself.”

After graduation, he spent a year in the Parallel Program sponsored by the University of Delaware and Delaware Technical and Community College before dropping out to support his new wife and daughter. His first job was in the rent-to-own business, but he quickly moved on to the heating and air-conditioning industry, first with a firm in Kennett Square and then to a Wilmington company. There, he soon became the top residential HVAC salesman in the country, doing $3 million in sales one year and $4 million the next.

In 2018, after working at the firm for a decade, Mendick joined his friend and former co-worker, Dan Ulrich, becoming co-owner of Greenway Comfort Solutions, in Claymont, Del.

Mendick brought to Greenway his sales philosophy — again gleaned partially from self-help audio books — that focuses on the customer’s confidence in, not necessarily affection for, the salesperson and his product.

“It’s a myth that you have to have a lot of rapport with the customer,” Mendick said. “In fact, you might buy from me over someone you liked better. What you really want when you’re paying $8,000 to $12,000 on a heating and air-conditioning system is confidence that your money is well-spent, the project is done right and there will be no problems on the back end.”

“And,” he said, “I genuinely care that you get more than what you paid for.”

His other “secret to success”: “I was number one not because there was something intrinsic within me; it was because I outwork everybody. When they clock off, I go home and study my craft.”

His associate degree in hand, he’s now working toward a bachelor’s in Business Administration in the fall of 2021. But apparently that won’t slake his new-found thirst for classroom learning. “My ultimate goal,” he said, “is to get the MBA and hopefully the DBA.”

He has found that WilmU makes such aspirations attainable.

“The beautiful thing about Wilmington University is you can pick up a degree on your way to a degree,” he said. “At a traditional college, you can go for a bachelor of Business Administration and if you don’t achieve it, you’re left with nothing. But at Wilmington, on your path to that degree you can grab an intermediate degree.”

Grabbing with both hands, Mendick has added a minor in Finance, and he also has earned a Certificate in Entrepreneurship.

He has maintained a 4.0 while choosing online courses that, for the most part, are relevant to his business, like Climate Dynamics. On the other hand, he said, “Art Appreciation was one of my hardest courses, but it stretched my mind. I like that. I don’t want to be stuck in a box.”

Mendick makes sure to fit family into his jam-packed schedule. Daughters Morgan, 18, and Regan, 16, play volleyball and softball, and he tries never to miss a game, doing classroom assignments on his computer between volleyball matches, or in his motel room while he follows the girls’ travel teams.

He and his second wife, Dina, have a three-year-old son. A great believer in the value of sports, Mendick plans to enroll Michael III in a youth wrestling program next year.

Meanwhile, despite the cratering economy, he says Greenway Comfort Solutions is thriving. “We are actually looking to hire more people,” Mendick said.

Of WilmU’s role in his quest for self-improvement, he said: “No way I could do college at a traditional school. Those people who feel they’re too old, too busy, their circumstances don’t allow them to go to school? I’m the perfect example of why that’s not true.”