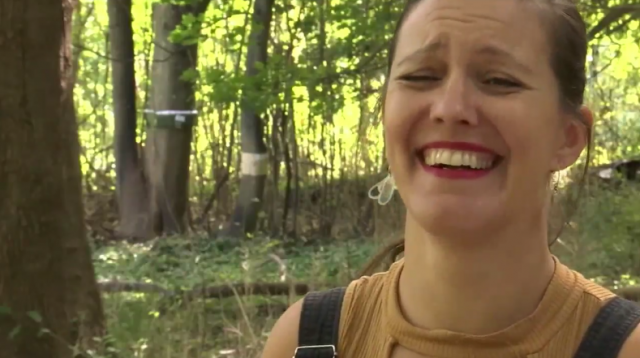 These two Montco artists are making the most out of the Spotted Lanternfly invasion by writing Lanternfly inspired music and turning the bug into jewelry. Image via 6abc.

As terrible as the Spotted Lanternfly is and as much damage as they cause, these two artistic Montgomery County individuals are making the most out of the invasion by writing Lanternfly inspired music and even turning the dreaded bug into jewelry, reports 6abc.

Member of the music group The Edge Hill Rounders and Glenside resident, Tim Cheney, killed his first Lanternfly one year ago at the Philadelphia Folkfest. After that first slaying, musical inspiration struck him and he wrote a song titled “Die, Die, Die, Spotted Lanternfly.”

The lyrics, clever and punchy, describe the beginning of their invasion and how they were “spotted first in southeastern PA, and they’re spreading farther day by day.”

Cheney wanted the song to be historically accurate as well as educational, both about the species and ways in which they can be killed. One line reads, “in the fall find the eggs on a water tree trunk and scrape ’em off in an alcohol dunk. That’s one sure way to make them die.”

It’s safe to assume that everyone is now aware of the danger Spotted Lanternflies pose to local agriculture and green space, and that squishing a Spotted Lanternfly on sight is common practice among the PA populace.

Less common practice, and in fact rare, is the dismembering of the bugs once they’ve been slain and turning their wings into beautiful earrings like Candice Jeffries.

“I say sorry before I do it because I feel bad,” said Jeffries.

When Jeffries first saw a Spotted Lanternfly, she thought they were beautiful. However, as an employee at the Lower Merion Conservancy, she is a firsthand witness to the damage the pretty ruby-red bug causes to native nature.

“Once I found out how invasive they were, I thought it would be cool if we could do something positive about the fact they have to be killed,” she said. So she started making earrings with their wings and selling them through her art business, TheWhitmanFox.

The first orders sold out quickly, and it’s Jeffries hope that each squash of a Lanternfly is one step closer to ending the tyranny of the Lanternfly and ultimately putting her jewelry scheme out of business.

Read more about Tim Cheney and Candice Jeffries at 6abc here and here.

Radnor Finance Exec Nominated by Biden to Serve on Investment Board

Wall Street Journal: Not Everybody Is Happy About the Way the War on the Spotted Lanternfly is Being Waged

This Delaware County Orchard Is Experiencing an Apple Explosion