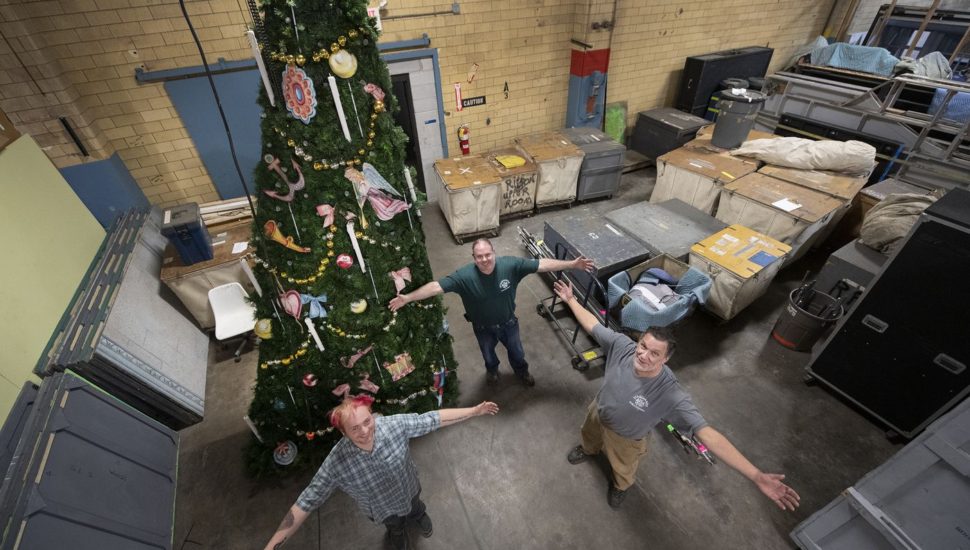 A warehouse in Sharon Hill holds much of the Pennsylvania Ballet’s ‘Nutcracker’ magic, including a recently refurbished Christmas tree, writes Ellen Dunkel for The Philadelphia Inquirer.

The tree, built in 2002, underwent nearly $100,000 in upgrades. Fixed were thinning foliage and a bottom section of lights that would no longer turn on.

“At the right angle, if an audience member was so inclined, they could peer right through,” said Paul Hewitt, the ballet company’s head carpenter and shop steward, who oversaw the upgrades.

Its new, darker foliage, festooned with candles and toys, should dazzle as it grows on cue during Marie’s dream, with hundreds of LEDs aglow.

The Pennsylvania Ballet warehouse near Delaware County Community College is a wonder in itself, where sets for many ballets are stored and sometimes built.

There are buckets of Victorian dolls, about 30 in various states of repair used by the girls dancing in the party scene.

A shelf held a number of nutcrackers.

Also standing around were taller, golden nutcrackers that will greet audience members in the Academy of Music lobby.

Everything will be moved this week to the Academy of Music for Friday’s ‘Nutcracker” opening.

Outdoor Ice Rink Is Back in Delaware County This Winter