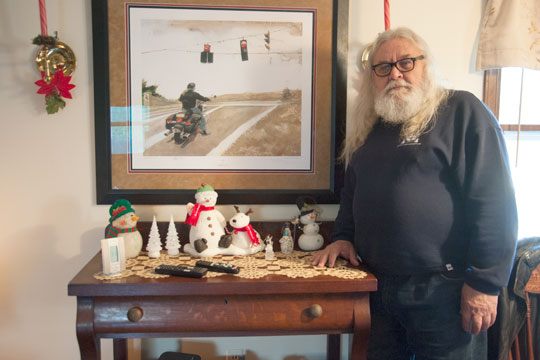 Andy Bell at home with his print of "Stop." Bell was the model in the Andy Wyeth painting. Image via Rich Schwartzman, chaddsfordlive.com.

Andy Bell’s relationship with famous Chadds Ford artist Andrew Wyeth goes back further than when he posed for Wyeth’s painting “Stop.”  Wyeth got the idea for the painting in 2004 when Bell passed him on Route 1, writes Rich Schwartzman for chaddsfordlive.com.

The painting shows Bell on his motorcycle at a Wilmington intersection..

According to Bell, the pair actually first met in 1964 when Bell was 13. His mother ran Bell’s Luncheonette on Route 1 in Chadds Ford that Wyeth  frequented.

Wyeth got a kick out of watching a youngster riding a mini bike and motorcycles, jumping the hill behind the restaurant.

The younger Bell was always on the Wyeth property and they’d go fishing together.

Bell would sometimes do work for Wyeth, including taking his two Stutz Bearcats on weekends to keep them in good running order.

The pair also rode snowmobiles together.

He was devastated when he learned of the artist’s death in 2009.

One of the last things Wyeth said to Bell was, ‘When I get over this, we’re gonna [sic] have some fun.’…

“There’s not a day that goes by that I don’t think of him,” Bell said.