Time Marches On: WilmU History Adjunct Teaches Students How to Investigate the Well-Hidden Past 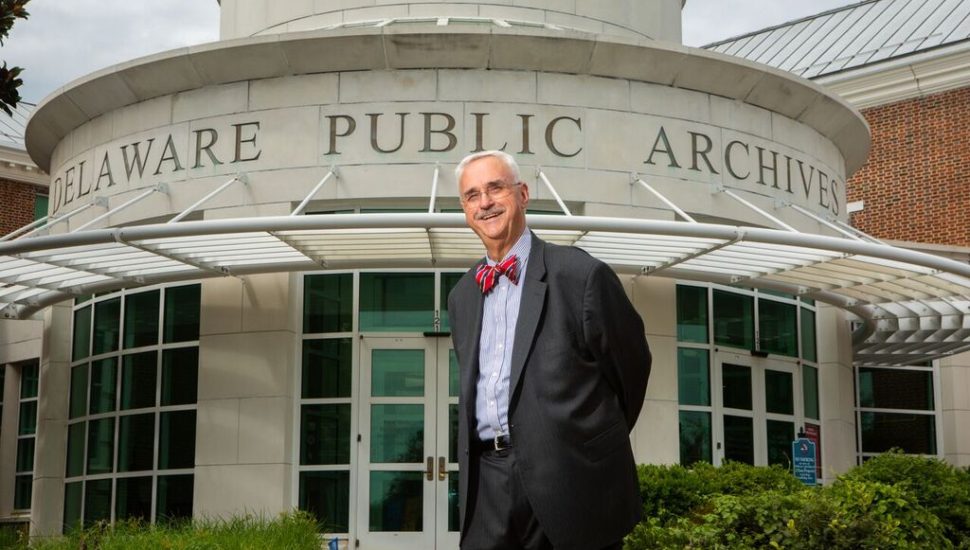 “We are not makers of history.
We are made by history.”
Martin Luther King Jr.

In Michael Dixon’s case, he was indeed made by history. For him, even from childhood, history has been and continues to be his life, quite literally.

But not history of the high and mighty, though Dixon, an author, writer, speaker and Wilmington University history adjunct, has encountered presidents and ambassadors on his ongoing journey through the past. Instead, he said, his focus “is the history of understudied people, everyday people, those you don’t find in textbooks or chapters of 19th century history.”

In other words, the rest of us.

Dixon says his purpose is to encourage our interest in local historical events and places, and help preserve that knowledge and, in doing so, create a bridge between past and present for us to enjoy and learn.

His knowledge of several subjects is extensive – prohibition, women’s suffrage, civil rights, the Cold War, the C&D Canal, the Mason Dixon Line, the building of the Conowingo Dam (the construction of which he found cost at least 20 people their lives) – and also subjects many have shied away from in the past or that were simply forgotten or ignored, like unsolved murders of small town police officers or lynchings in 19th and 20th centuries. He is always interested in learning more about topics he comes across in his many travels around the Mid-Atlantic region and beyond.

Information on national issues is always plentiful on a broad scale, Dixon says, so he digs deeper to uncover what hasn’t been uncovered for a long time – and he teaches his students to do the same.

“You can find plenty of material on the national suffrage movement, for example, but how did people in Delaware or Delmarva react to it,” he said of the movement to give women the right to vote. “Delaware had some pretty significant actions going on. It had a chance to be first to pass the 19th Amendment, and they failed and passed it to Tennessee. The Delaware legislature had to ratify the constitutional amendment, and with their ratification, they would have given women access to the ballot box, but they literally failed to decide.”

As an historian, he started very young. As noted in his online biography, he was a young teen in the 1960s when he started volunteering at the Historical Society of Cecil County. At the end of summer vacation, the Society newsletter noted, “Mike was the first high school student who has ever evinced sufficient interest in local history to offer his services to the Society.”

Dixon went on to earn degrees in History and Behavioral Sciences from Washington College, Saint Joseph’s University, and Wilmington University. He specializes in African-American studies, cultural and social history, regional and community studies. He’s a visiting scholar for the Delaware Humanities Forum and Delmarva Discussions, as well as a member of the speakers’ bureau for the Maryland Humanities Council.

Dixon has appeared on the Today Show, Maryland Public TV and broadcast news programs; in National Geographic, Southern Living, and Chesapeake Life magazines; and in various scholarly journals. His digital presences includes a website and blog containing useful links for those working on historical research.

Recently, he had the opportunity to provide start-up leadership for the development of a 62-acre living history museum for a municipality.  That work involved organizing a nonprofit foundation, raising $1.5 million to start work on restoring a couple of 200-year-old houses, and the development of an interpretive plan for the historic port on the Chesapeake Bay.

Daughters of the American Revolution in May 2019 awarded Dixon the DAR Historic Preservation Recognition Award. The award, according to the DAR press release, “recognizes and honors an individual or group that has done recent remarkable volunteer work at the community level. The award recognizes achievements in all areas of historic preservation.”

The DAR officials noted in the presentation that Dixon’s college course “Susquehanna Tales” chronicled “the geography and settling of the lower Susquehanna River Valley in Maryland and the building of the Conowingo Hydroelectric Dam. This short course involved two hours of classroom lecture followed by two hours touring the visitor sites, both above and below the dam. Since historians are constantly on the lookout for items of historic value that have been discarded or hidden away, Mike was able to rescue eight large photograph albums of hundreds of photos taken before, during, and after the building of the dam. Viewing these photos made Mike’s lecture and tour come alive, showing the work and sacrifices made towards completion of the dam in 1928.”

He’s also embraced a stint as a guest curator for the Frederick Heritage Historical Society, for which he offered a traveling workshop on the Mason Dixon Line, the original line surveyed in the 1700s that set the state lines for Delaware, Maryland, and Pennsylvania.

“They wanted to see, why did that [line] come about, what was segregation like along the line, what were the social, cultural, even popular media interpretations reinforced?” he said. “I had a great time. All I did was work my way along the little theaters along the line.” He adds that, often, the people running the theater would say, ‘Oh yeah, we were, even in Pennsylvania, the theaters were segregated.’”

Dixon’s stories include an interesting one in which he’s currently working about the origin of I-95 through Delaware into Maryland. In the 1960s, when President John F. Kennedy was in office, Dixon noted several African ambassadors from newly formed, formerly British, nations wanted to travel from the United Nations in New York to Washington, D.C., and they had to travel through Delaware and Maryland, which were segregated states at the time.

“They would get in their limo, start down the New Jersey Turnpike, they cross the Delaware Memorial Bridge, then we don’t have 95,” he said. “It was the era of Jim Crow in Delaware, and in Maryland. Once they crossed into Delaware, they could not generally stop at a restaurant.”

This was the Cold War era, said Dixon, and Africa was awash in newly formed governments. “Castro and Khrushchev know they’ve got a leverage point, and they start talking to the newly free countries. They say, you know, they talk about equality but you’re not really equal over there, look how they treat you. And Kennedy says we’ve got to get that fixed.”

Kennedy apparently put pressure on the governors of both states, resulting in some laws changing and the construction of I-95. Kennedy opened the Maryland-Delaware section on Nov. 14, 1963, in one of his last public appearances.

Dixon’s enjoyment of teaching is obvious, with subjects as diverse as African American heritage and cultural studies, Delaware history, or history of criminal justice. His take is to get his students moving, actually visiting sites and libraries to conduct research, “getting them in the field,” he said.

“They can go on the internet and get their facts, but what they need to do after they assemble the facts is learn how to evaluate them, how you test them, so when they do that Delaware history course, for example, they go someplace to see the microfilm, to all the archived books,” he said. “The internet is wonderful, but not two or three percent of the historical records are on there.”

Dixon says it can be difficult to take a class of incoming freshman and convince them to engage in history. “But they should engage in it, that it can be interesting, that it answers stories about today. I always do a lecture on everything has a past, and we do a little exercise around it. They can even talk about family history if they want.”

Many aspects of local history, even family history, perhaps deliberately forgotten, can be uncovered through this research. As an example, Dixon brings up the history of lynchings in Delaware and Maryland in the last centuries. Through his work on the subject, he has been involved in recent establishment in Maryland of local memorials to those who died in these lynchings. It is a topic many have avoided. “But we have to know where we came from to know what happened,” he said.

In his classes, he teaches students how to conduct investigations into a well-hidden past. “Each one of these has a deep story about what was going on,” he said. “It even causes people who aren’t too interested in history to pay attention to it, because we work through the process of records. I’ll show them the records, and we’ll come to the conclusion of why some back then didn’t want history remembered that way.”

In fact, through research, such an event was uncovered in one student’s family history, he adds. “Usually what happens is families are so embarrassed, that generation who lived it, they were worried about their own safety. It dies in memory.” He said he hopes his work with his students does not allow that to happen in their lifetimes, to help them remember where they came from.

History will always be his life, said Dixon, so much so he really doesn’t see retiring from it in a traditional sense. “I don’t see stopping,” he adds. “You know, time marches on, but I enjoy it. There’s always something to be curious about.”