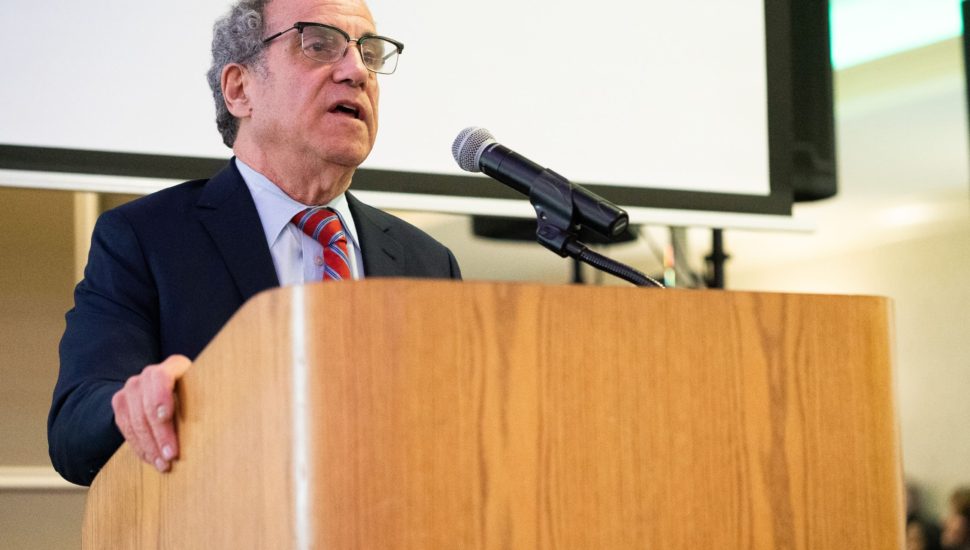 Arthur Weisfeld is director and one of the founders of Senior Community Services, a Delaware County non-profit which provides activities, information and support to older persons throughout the county. Mr. Weisfeld is himself a youthful 72 years old.

DELCO.Today recently spoke to Arthur Weisfeld about his work with Senior Community Services and about the role SCS senior centers play in providing a quality life to Delaware County’s older community.

Where did you grow up? “I grew up in Mt. Airy in a row house, which I thought was the biggest space you could ever need. I went to Germantown High School which a couple years ago closed. Our school was recognized as a model, racially integrated school. It was highlighted in one of the national magazines. So that was a positive experience.”

What memories do you have growing up? “You walked out your door and instantly there were things to do. We had 60 houses on the block. You didn’t have to go that far to fill up a Halloween bag.”

His mother was a homemaker but also was the canteen lady at Camp Green Lane in Green Lane, Pennsylvania.  His father owned an Army Navy Men’s store in Camden, New Jersey.

“I went to another camp close to that. Camp Arthur. I tried to go to a camp that had the same name as myself.”

“It was a very important experience for me. It actually led me to my work.”

“The camp was run by a Jewish agency so it had kind of a social service bent to it.“

Who were your major influencers in your life? “The director of the camp, his name was Harold Beeker, he was a social worker. He had a master’s in social work. I thought I’d like to be like him, run a camp. I’m going to major in social work. And I did.”

Major influencers were the founders of COSA (County Office of Services for the Aging), Jack Bauer and Barbara White.  “They guide me every week. I just think they were visionary, grounded, great values, driven by mission, prudent managers, good stewards of the money, creative.”

What’s the best advice you’ve received?  “When I first started working. I’d be overwhelmed. My father told me to break it into smaller parts. I passed this on to my children. I think it’s very helpful advice.”

What were your interests/activities in high school, college?  “I’m a baseball fan. I was never good enough to play. My daughter’s a good athlete. She played softball in college. I live vicariously through her.”

Where did you go to college?  “I went to Penn State as an undergraduate, majoring in social work. My first year I went to the Abington campus and then I spent the next three years at the main campus.”

He went on to earn his Masters of Social Service degree at the Bryn Mawr School of Social Work and Social Research.

What was your first job? “My first job was working for the Department of Public Assistance, welfare, as it was called. In those days, there was no Department of Aging. Part of my caseload was the elderly. I noticed I really enjoyed working with older persons. I also had positive experiences in my own personal life with older people. I visited my grandparents every Sunday.”

“I started my career in social work working with young people and I gave it up to go into the other end of the age spectrum, working with older people.”

How did you end up starting Senior Community Services?  In 1974, Mr. Weiseld took a job as an assistant with the Retirement Senior Volunteer Program. “They were just starting and there were only 11 cities in the country that had one. Philadelphia was one. I became more and more committed to working with the aging.”

“In graduate school, I worked as a community organizer around fair housing issues in north Philadelphia. That was kind of cool. I was a grounds-up organizer, like Barack Obama.”

“In a very short period of time they became legends in Delaware County and still are. Both have passed away.”

At the time there were only a few senior centers, one in Upper Darby and a couple in Chester.  “New senior centers were being planned,” as more federal money was being freed up to help the elderly.

“We created a new non-profit corporation. When I think back what they asked us to do it’s scary.”

What does Senior Community Services run?   “SCS runs four senior centers located across the southern tier of Delaware County. Working with Yeadon and Lansdowne community leaders, the first center SCS created was the Friendship Circle Senior Center. Later SCS launched the Schoolhouse Center in Ridley, then took over operations from COSA of the Darby Township Senior Center, now known as the Good Neighbor Senior Center.  In 1985, SCS also took over operations of the Chester Senior Center that had been run by the City of Chester.”

“Then COSA started asking us to get involved in the in-home care program the state was creating, which we now know as care management.”

“You now have Senior Community Services with four senior centers in various locations, various satellites and care management. The Caregiver Support Program was created in 1990.”

Next came two programs in the mid-2000s, formerly run by the Horizons Unlimited Geriatric Educational Corporation.

“One was the memory stimulation program, that was their signature program, a brain fitness program that no one was even thinking about when they first started it, and then the APPRISE health insurance counseling program, which is a very important program, for which we’ve been the contractor ever since.”

The most recent program, started about five years ago, was Aging at Home, to help seniors remain in their homes, offering assistance on things like home repairs.

“It was a demonstration program that was sponsored – fully-funded – by the United Way. They wanted to create this “village” program for low and moderate income seniors. They selected three organizations to administer it. We were selected for this region.

“It started in Lansdowne and Yeadon. We’ve expanded into the greater Ridley area.”

What challenges do you face? “United Way went in another direction, as the saying goes, and no longer provides support for any aging type services which was a big blow to a lot of organizations like ours. We’re still recovering from that. While we’ve had to make some cutbacks, we haven’t ended any programs.”

What solutions are you working with? “The other part of it is we’re taking a positive approach, that is, we’re trying to raise more money. We’re trying to focus on the revenue side.”

They now have two people dedicated solely to fundraising.

What unique challenges do they face?  “It can be a challenging time of life.  With all the positive things you can think about, there’s loss, loss in terms of your physical prowess…also there’s death. It could be a spouse or friends. There’s also the loss of meaning and purpose that can happen. You may have been very involved with your family. Now perhaps you see them three times a year.”

How does Senior Community Services address those challenges? “I think our organization addresses those issues and diminishes those liabilities.

“It provides the opportunity for enjoying this stage of life.”

There’s also a focus on education, self-enrichment, health and fitness.

“Anyone can go to a gym and work on a machine. The hardest part of that is walking out the door, having the discipline day after day to do it. But, if it’s in a social environment and you walk in and peop

le greet you and enjoy your company, they’re much more likely to get involved with it and stay with it.”

Tell us about your family.  His wife is Virginia Brabender, a psychologist who teaches in a doctoral psychology program at Widener University. His son, Jacob, is married and works as an attorney in New York.  His daughter Gabrielle works at Surrey Services as a center manager, following in her father’s footsteps.

What are you looking forward to in the future?  “I still love and am involved with my work. I’m not thinking about retirement. We’re working on some program ideas, and the new challenges ahead of us fiscally, working hard to fill that gap.”