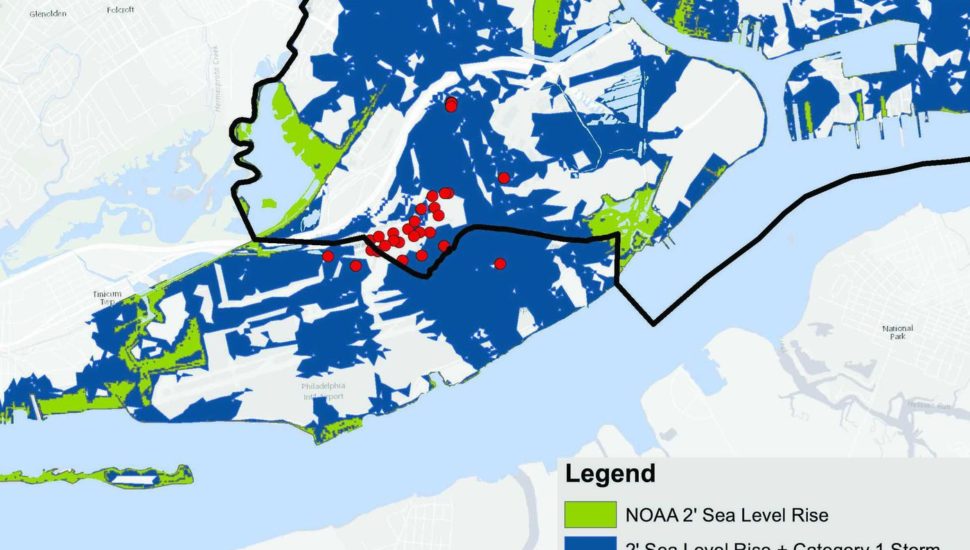 Image via ICF, City of Philadelphia, Rodriquez Consulting, LLC. Map illustrates the impact of two feet of sea level rise, plus a category 1 storm at the Philadelphia International Airport.

“We’ll have to build up,” said Ray Scheinfeld, the airport’s environmental manager. He referred to the airport’s planned expansion on 152 acres purchased in the last few years. “It’s absolutely being designed with climate change in mind.”

The airport is one of the city’s most vulnerable areas to the combined effects of higher seas and heavier storms, Philadelphia officials say.

The airport is located just off the river, part of a tidal estuary that flows to the Atlantic Ocean. As the ocean rises, the Delaware will follow.

In the 20th century, sea level rose by 12 inches in Philadelphia, according to research by Rutgers University’s Institute of Marine and Coastal Sciences.

Estimates of sea-level rise over the next 40 years range from 1.2 feet to more than 4.5 feet by 2060, depending on how much carbon dioxide is pumped into the environment by power plants and motor vehicles, according to the Delaware River Basin Commission.

Read more about how climate change could affect the Philadelphia Airport here.