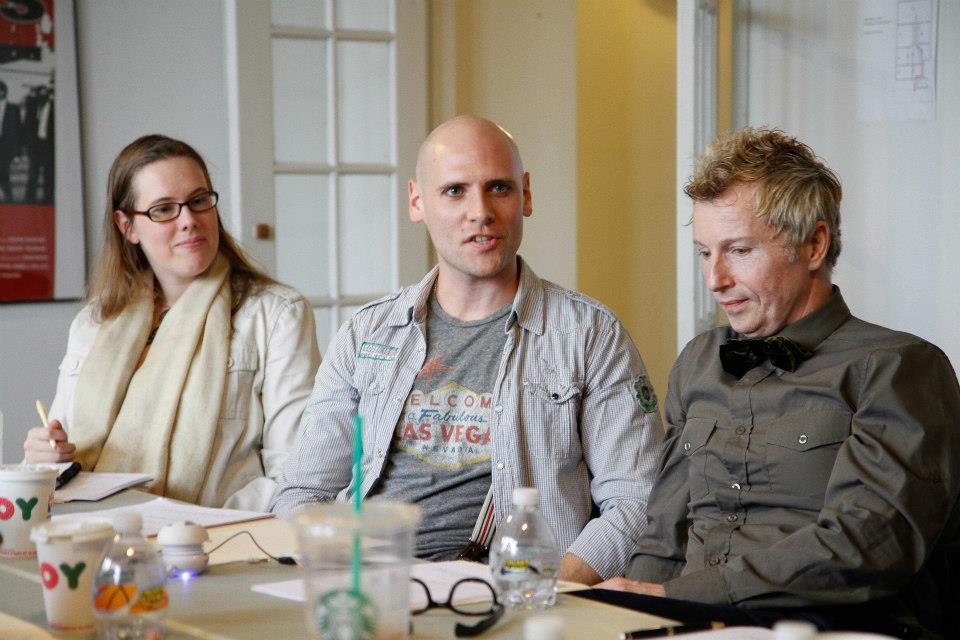 Image via Neumann University. Sara McDermott at a table reading of the screenplay for DINE with Jerad Bortz and Steven Skeels. DINE is a TV show about a New York City restaurant that becomes the subject of a reality show.

When Sara McDermott walks into her Neumann University classroom this fall to teach screen writing, her students will pay close attention to every word.

That’s because McDermott is already an accomplished screenwriter. She optioned two of her feature film screenplays this spring.

The first, “Still Waters”, was optioned to producer Bruce Miles, and the second, “Corruptible”, to an independent film production company, Mission Ranch Films, which has hired her to direct the movie.

“Still Waters” is a “creature feature,” as McDermott affectionately describes it, about an alligator in the bayou who begins to feed on people after its food source is wiped out.

“Corruptible”, “still a working title,” said McDermott, is a dark, philosophical thriller about a man and woman who meet on a cross-state drive. “This amazing script almost fell from the sky,” McDermott adds. She said it was the fastest she ever wrote a screenplay, completing it in only a few hours.

The Wallingford native also wrote the screenplay for the film “Left”, which was bought by a production company in 2014 and released on Amazon in 2018.

It’s a coming-of-age story about a college sophomore who has a Brachial Plexus (nerve) injury to her right arm and aspires to be a pianist despite her adversity. McDermott got the idea for “Left” during graduate school when her best friend invited her to a classical concert where a pianist performed Sonata for the Left Hand.

“Everything I write kind of has a creepy edge,” she admits.

In 2014, she founded The Princeton Independent Film Festival (Prindie), the mission of which is to promote diversity in film by showcasing female and minority filmmakers. With McDermott’s leadership and guidance, this event has grown to become a staple on the Princeton community calendar.

Due to the success of the festival, she has also been invited to develop and deliver presentations for Princeton’s film community, as part of both the Princeton University Film Forum and the Princeton Festival.

McDermott has won awards, too. Recently, she came in second (among almost 800 entrants) in the 2019 Emerging Screenwriters ‘Get it Made’ Competition.

In 2012, her short drama “Chance” (based on a chance encounter of former lovers in Grand Central Station) won the Achievement in Short Film Award at the Williamsburg Internati

“Audiences expect a format,” she said, analyzing the popularity of her work. “With everything I write, I take into consideration the audience and ask myself, ‘Who is this movie for?’”

Always in perpetual motion, McDermott will continue to stay busy this summer. She’s been hired to write two film scripts and is working on a feature documentary about emotional abuse, a topic she feels strongly about. Then, this fall, she will be back behind the podium at Neumann, offering professional advice to budding screenwriters.