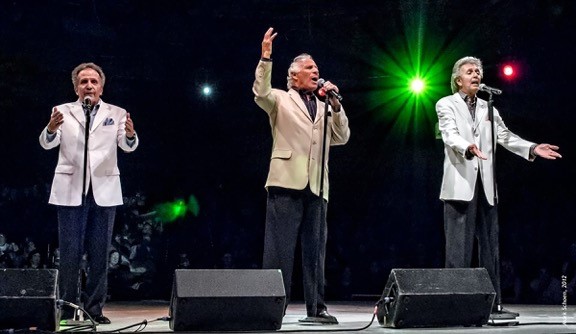 With the nationally renowned doo-wop groups Jay Siegel’s Tokens and The Happenings – plus the region’s well-known “girl group,” The First Ladies of Rock and Soul – the evening will be a nostalgic night of outstanding live music.

The event will be co-hosted by Lou Costello and Steve Kurtz of Cruisin’ 92.1 FM WVLT.

Upper Darby Performing Arts Center is located at 601 North Lansdowne Avenue in Drexel Hill. Tickets are $40-$45. UDPAC members and veterans save $2. Tickets may be purchased online here or by calling the box office at 610-622-1189.

One of pop music’s most versatile and enduring groups, Jay Siegel’s Tokens has remained popular with generation after generation since their first smash hit – “Tonight I Fell in Love” – soared to the top of the charts in 1961. Soon after, the group landed at No. 1 with its signature song, “The Lion Sleeps Tonight.”

The Happenings’ major hit was “See You in September” (1966), which was originally recorded by The Tempos in 1959.

The First Ladies of Rock and Soul kick off the night with the “girl group” experience and will get the audience movin’ and groovin’ with songs by The Supremes, Martha Reeves and the Vandellas, The Shirelles, The Marvelettes, Mary Wells, and more.

Thomas N. Micozzie, Mayor of Upper Darby Township, is proud the township is recognizing the region’s veterans with an evening of live music by renowned recording artists.

“It is important to honor the sacrifices the veterans in this region have made throughout the years to protect our country,” he said. “What better way than a live concert to bring our veterans together to enjoy excellent nostalgic music? We know the audience is going to have a great time walking down memory lane during this outstanding performance.”