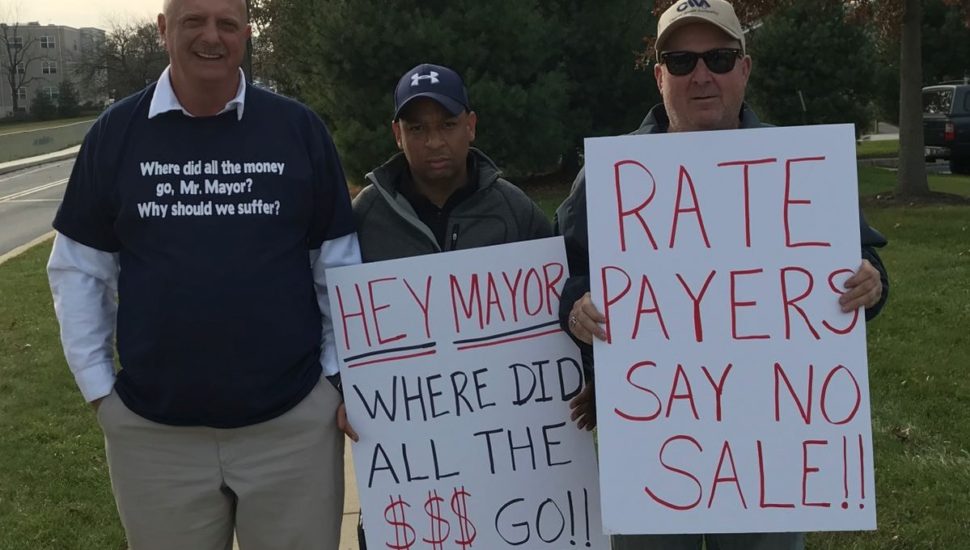 Delaware County residents protest at Neumann College before a meeting of the Chester Water Authority board. Image via Joseph DiStefano, Philadelphia Inquirer.

Chester Water Authority customers joined employees at a recent board meeting to protest its proposed acquisition by the public utility Aqua America, writes Joseph DiStefano for the Philadelphia Inquirer.

Aqua of Bryn Mawr had previously made an unsolicited offer of $250 million, plus $70 million of debt, for the utility, which serves 44,000 residential and business customers and 200,000 users in Delaware and Chester counties. It was unanimously rejected by the Chester Water board.

But the deal may yet go ahead, according to utility analyst Ryan Connors. He recently wrote in an investors’ report that Aqua had increased its offer at a meeting earlier this month.

Residents also believe that the sale could be approved, so the city of Chester can use the proceeds to pay its bills, which have been mounting for decades. But many are concerned because Aqua usually charges around 40 percent more than Chester Water currently charges its customers.

Meanwhile, Aqua has also taken out full-page ads in local newspapers to gain support, as it promises to keep water rates at their current levels for 10 years and retain the utility’s staff if it is successful in privatizing the authority.

Read more about the potential acquisition of Chester Water Authority in the Philadelphia Inquirer here.