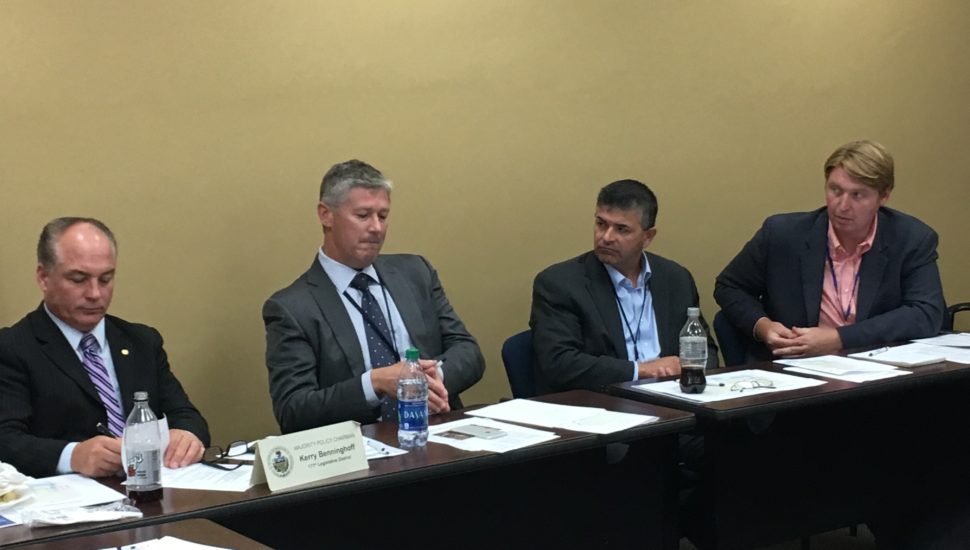 Jonathan Kemmerley, second from left, President of The Pilots' Association for the Bay and River Delaware, explains the economic impact of the shale gas development during a discussion at Energy Transfer Partners' Marcus Hook Industrial Complex.

Leading members of the Pennsylvania House of Representatives visited Delaware County this week to see first-hand the benefits of the Marcellus Shale at the Marcus Hook Industrial Complex.

The panel then toured Energy Transfer Partners’ Marcus Hook facility, where Sunoco Pipeline’s Mariner East pipeline system is delivering resources such as propane and ethane for use as fuel, industrial feedstocks, and other applications domestically and abroad.

“Everything we touch is a byproduct of what you folks are producing,” said Benninghoff, citing the myriad uses of petroleum products in everyday life, from clothes to office supplies to medical equipment.

Anthony Gallagher, business manager for Steamfitters Local 420 in Philadelphia, said his members have earned more than $185 million working more than two million hours on the Mariner East 1 and 2 pipeline projects. Those earnings have solidified the union’s health and retirement plans, in addition to the employment of hundreds of workers.

“We’ve benefited astronomically” from the Mariner East project, Gallagher said. “From our standpoint, it’s been pretty much a Godsend what’s going on.”

Also benefiting is the maritime industry, which has seen ship traffic increase with Sunoco’s investment of more than $3 billion in its Mariner East projects, and, with it, the ancillary commerce that port activity brings.

With the deepening of the Delaware River nearing completion, “Everything is in place to grow the port,” said Jonathan Kemmerley, president of The Pilots’ Association for the Bay and River Delaware.

Those jobs have made Pennsylvania a destination for those seeking a family-sustaining career, and given young, ambitious Pennsylvanians a reason to stay here. But Pennsylvania must build the proper infrastructure, including pipelines and manufacturing facilities, if the promise of the Marcellus Shale will pay off.

“This is a generational opportunity at our fingertips to keep our kids at home,” said David Spigelmyer, president of the Pittsburgh-based Marcellus Shale Coalition, the region’s largest shale development trade association.

The panel also included the following State Representatives whose districts cover the breadth of the Commonwealth and who have witnessed the positive impacts of the shale industry: