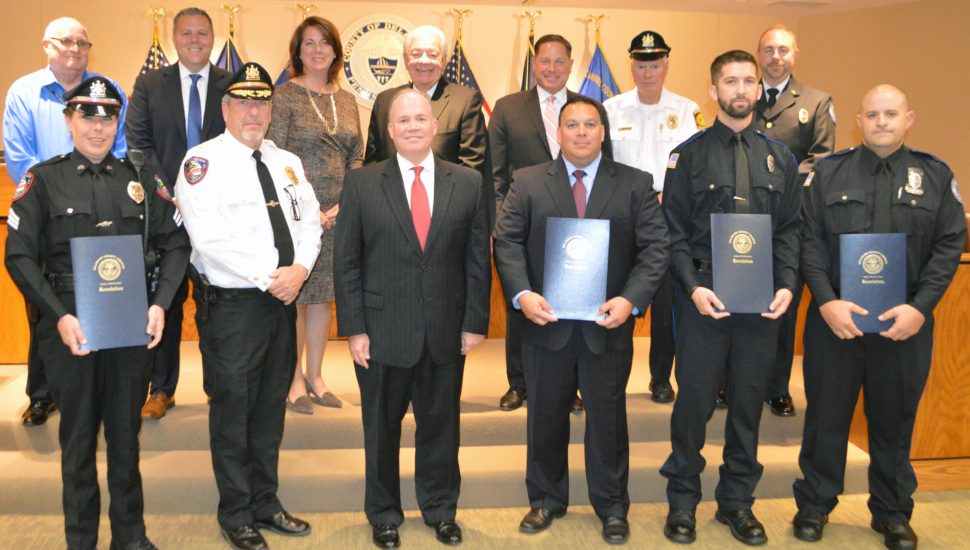 We are sometimes faced with alarming and unusual medical emergency situations that require the assistance of our paramedics and trained first responders. These trained individuals include our paramedics, emergency services personnel, and members of the law enforcement community.

At the meeting, Councilman John McBlain spoke about the heroic efforts of the men and women, and expressed how grateful the county is to the many citizens who use their training and skills to help others in times of emergency.

On Sept. 4, a significant fire occurred in Clifton Heights. At approximately 8:24 AM, police and first responders were dispatched to the Cliff Park Apartments in the 300 block of North Sycamore Avenue for a reported building fire.

The first-responding officer to the scene was Sergeant Marie Morgan of the Clifton Heights Police Department. She quickly located and reported the fire to be in the third floor of the building. Morgan was then joined by Officer Christian Caputo of Clifton Heights and Sergeant Steve Ziviello of Aldan Borough Police Department. Together, they entered the building and successfully evacuated all but the third floor due to heavy smoke and flames.

In response to a report of an entrapment on the third floor, EMT Kevin Cosentino and paramedic Sam Mason joined the three police officers and located a mother, teenage daughter, and two toddlers in perilous and heavy smoke conditions.

As directed, the toddlers were dropped safely to Ziviello and Cosentino and tended by Morgan and Ziviello, while Caputo medically cared for the mother and teenage daughter who were forced to jump from the window to escape smoke and fire conditions.

“Faced with an alarming and unusual emergency, these first responders disregarded their own personal safety to save the lives of others,” said McBlain. “They acted decisively and bravely, and responded during a time when seconds meant the difference between life and death. We are very fortunate to have them serving here in our community.”