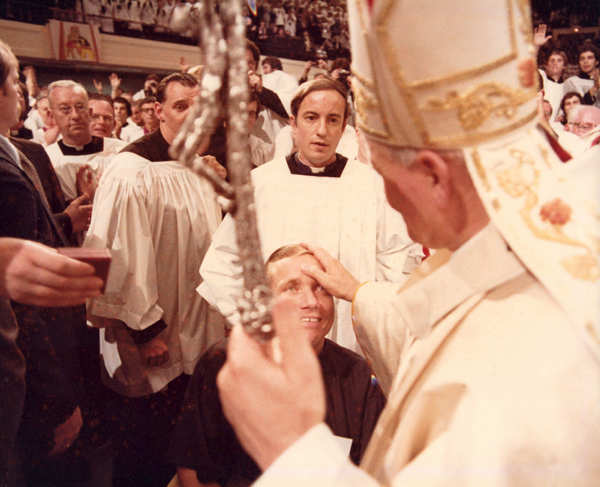 Despite becoming a quadriplegic at a young age, the Rev. William Atkinson, seated in this picture, became an ordained priest and is now a candidate for sainthood.

A local community of believers already considers him a saint, but now the Catholic Church has officially opened the book on the Rev. William Atkinson’s life of faith and ministry en route to consideration for sainthood.

Atkinson severed his spine while tobogganing, but went on to become the world’s first Catholic-ordained quadriplegic and a legendary Bonner teacher.

“He didn’t say, ‘Why me?’ He said, ‘Why not me?’ and integrated the circumstances of his life into his spirituality,” said the Rev. Michael F. Di Gregorio, a fellow member of the Augustinian Province of St. Thomas of Villanova.

Atkinson was raised in Upper Darby, ordained in 1974 by a special dispensation from Pope Paul VI, and died in 2006.

A pair of local sainthood committees will now investigate “those who knew Atkinson and study letters, books, and other documents written by or about him. Their findings will then be sent to the Vatican, where, if they are approved, the pope will confer on Atkinson the title of Venerable” — or Blessed or Saint if miracles are also attributed to his intercession.