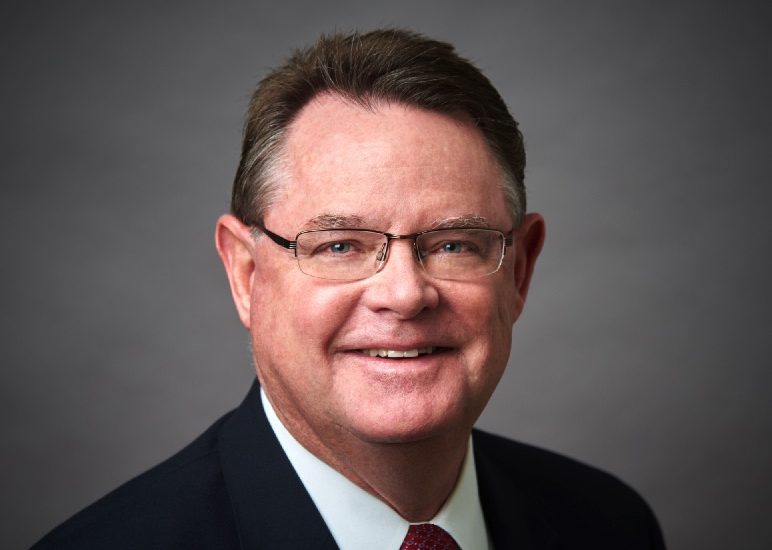 Bill Hieb, President and CEO of DNB Financial, parent company of DNB First, the oldest nationally chartered community bank serving the Greater Philadelphia region, recently sat down with DELCO Today. He discussed growing up in Drexel Hill, his swimming prowess at Bonner and then Penn State, wanting to be a veterinarian and discovering a love of economics and finance in his freshman year, and the “three Bills and a Jim” who guided his life and career, as well as DNB’s future.

Where did you grow up, Bill?

I was born and raised in Drexel Hill, the oldest of three children. I attended St. Bernadette’s School and then Monsignor Bonner High School. My father was a Catholic high school teacher. He taught initially at Roman Catholic High School in Philadelphia and then at Cardinal O’Hara in Springfield. My mother was a homemaker and then a secretary for Upper Darby Township.

What do you remember about growing up in Drexel Hill?

Fireflies in the summertime, and leaving the house in the morning and heading to the playground on my bike for a pickup game of baseball. I had a close-knit family and a lot of friends, so it was a safe environment to grow up in.

What sports did you play?

I swam competitively, primarily with Suburban Swim Club/Foxcatcher Farms in Newtown Square, but also at Monsignor Bonner. I continued at Penn State, where I was a four-year letterman and captain of the team in my senior year. At Penn State, I set four school records, which have long since been retired, and was the recipient of the university’s first athletic scholarship for men’s swimming, which I shared with a teammate.

What gave you the competitive edge in swimming?

I enjoyed swimming and had a natural talent to do well. I also liked the individual nature of the sport and being able to compete against myself and others all within a team environment. I learned valuable life lessons through the sport – coachability, time management, team building skills, how to set goals, how to accept defeat, how to plan the work and work the plan. Success in life comes from discovering your talents, setting goals, and putting in the time and work to achieve them. I found I learned more in the long haul from failure than immediate or easy successes.

What was your first job?

As a boy, I had three paper routes: I delivered the Evening Bulletin every afternoon, the Sunday Inquirer on the weekends and the weekly Delco Times every Thursday.

Beyond delivering papers, I was a lifeguard and a summer swim club coach through high school and then lifeguarded in Avalon for several summers during college, where I was a long swimmer and surf dasher for the patrol.

What did you take from those early jobs that stay with you today?

First, showing up on time. Then, the importance of relationships. I am still close to the people I lifeguarded with in Avalon and swam with at Penn State. A little known fact, last year when my oldest son, Ryan, lifeguarded in Avalon, his captain was the same Murray Wolf I worked for 40 years ago in my rookie season.

What kind of music were you listening to back in high school and college?

I was a good student and could have gone anywhere. My father wanted me to attend Notre Dame, but I declined their acceptance. I couldn’t see myself in South Bend, Indiana. I choose Penn State because I wanted to attend a large college with a large selection of classes and a strong football program. I always liked Penn State. At the time, I thought I wanted to become a veterinarian, and Penn State had a strong pre-vet program.

Did you stay on the vet track once you got to Penn State?

I moved off it during my freshman year when I took an elective finance class, which I really liked. That experience led me to switch my major. I ended up being a finance major with a minor in economics.

Looking back, was Penn State a good choice for you?

Even though I’m not a veterinarian, obviously, I thoroughly enjoyed my experience at Penn State. It afforded me the opportunity to attend a large university, learn, develop and become a better person, yet, because of my swimming teammates, I was still part of a smaller, close-knit group.

Has your leadership style changed much over the years?

My leadership style hasn’t changed much. I’m not a boastful guy, and I wish the best for everyone. I just wish a little better for the team I’m on. I try to lead in a quiet manner, through others, and earn people’s respect through my actions and by fostering closer personal relationships with the people I work with. I learned early on the importance of paying my dues, working hard, learning from others, and contributing to the team.

What did you do after graduation?

Having not grown up in a “business” household, I figured that by going into banking it would afford me the opportunity to learn about the business of business. Once I got into banking, I enjoyed it and had the good fortune of working for just two companies over my 40-year career.

What was the first bank?

When I left, I took the summer off in Avalon, and thought about what I wanted to do with the rest of my career. After much thought, I decided I wanted to get back into community banking. Through a former colleague, I reached out to Bill Latoff, whom I had known during my time in West Chester. Bill offered me a position of Executive Vice President and Chief Operating Officer of DNB First, then known as Downingtown National Bank.

Who gave you your big breaks?

I wouldn’t call them big breaks, rather I see myself as being blessed with four good mentors over the course of my life and career. What I call my three Bills and a Jim.

My father, obviously, is the first Bill. He helped form my early years, providing the guidance only a parent can.

After graduating from Penn State, I worked for a gentleman named Bill Lee at Hamilton Bank. Bill Lee taught me the ins and outs of banking and how to be a good banker.

My third Bill is Bill Latoff, who taught me the value of relationships, community service, and how to be a businessman.

Finally, I’ve had the opportunity to work with Jim Thornton, the bank’s current chairman. Jim was previously the CEO of the Brandywine Hospital, among other accomplishments. Jim’s vast experience in organizational dynamics is extremely valuable. He’s taught me that successful organizations need to be smart, agile, and aligned. It’s difficult enough to be smart and agile, but the hardest part is alignment.

Truly getting everyone on the same page. Ensuring that the customer experience is consistent across each line of business. That when a new customer is on-boarded, they feel understood and appreciated. It’s important that the bank is properly positioned to serve our four constituencies.

I always remind people that the bank is here to serve four constituencies – our shareholders, our customers, our community, and our employees. It sounds so simple, but it’s hard to do day in and day out. As a public company, it’s critical that we meet the need of our constituencies.

We work hard to achieve success – providing financial services that benefit our customers, helping them achieve their goals, volunteering and through outreach into the community, keeping our employees engaged. And the best part is that we get to do it again tomorrow, next week, next month, and next year. DNB has been around since 1860, so our message must continue to resonate well.

Looking back over the last 18 months and DNB’s merger with East River Bank, what has worked?

We spent a lot of time focusing on understanding our respective organizations, appreciating our similarities as well as our differences, and doing our best to see that we treated everyone respectfully. We checked individual egos at the door and set up an environment that accentuated everyone’s skill set. By the time the two companies were integrated, there were no real surprises.

Everyone always says in a merger that one plus one equals three. In reality, we all know, one plus one usually equals one and a half. As we went through the merger, I challenged the organization to get to “two” knowing we could work on getting to “three” down the road.

As you look into the next six to twelve months, Bill, what are DNB’s challenges and opportunities?

The fact we’re a much larger bank than we were a year ago is an opportunity and a challenge. We have a larger, more experienced team as well as an expanded retail presence, which provides us a great foundation for continued growth.

From a lending perspective, we have always done business with companies across the entire Philadelphia region. We’ve expanded our commercial lending team, hired several experienced CRE and commercial loan officers. We have expanded our SBA lending efforts as well as our residential lending programs. We continue to add to our wealth management team. And we increased our Treasury Management staff and have invested in technology that improves both the consumer and business mobile banking experience.

It’s been a busy period for you and the bank, hasn’t it?

Yes, it has. It’s been a challenge. And it’s been very rewarding. I have great people that work hard every day. It’s a total team effort.

Will DNB look at new markets?

Our focus will always be on being the best we can be, to be a good financial partner to our customers, and to be engaged and active in the communities we serve. We were founded in 1860, we know our roots, and remain focused on being a strong community bank. This market is an attractive one, and we want to continue to grow organically as well as through acquisition.

Last question, Bill. What is the best piece of advice you ever received?

There are several key points that my mentors taught me over the years. I would summarize their advice as follows: First, keep your skill sets sharp; second, accept and anticipate change; and third, don’t just pay it back, but pay it forward.