Sixteen-Year-Old from Nigeria Set to Graduate from Chester High 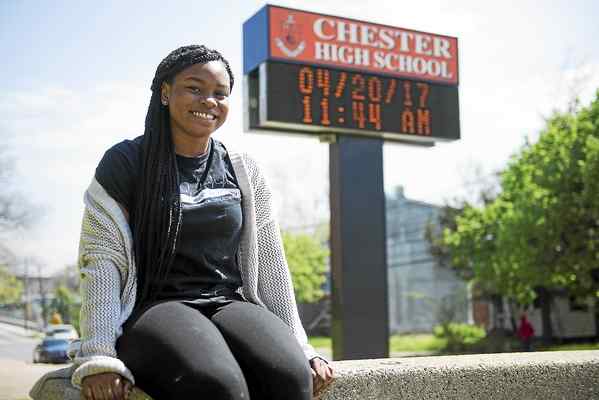 Deborah Ekwale, a native of Nigeria who immigrated to the U.S. at 14 and will graduate from Chester High at 16, plans to use her scholarship to enroll at Bryn Mawr College. Image via Rick Kauffman, Digital First Media.

Deborah Ekwale, a 16-year-old native of Nigeria who immigrated to Delaware County two years ago, will soon graduate from Chester High, and she plans to further her studies in college, writes Rick Kauffman for the Daily Times.

Ekwale hopes to pursue a degree in women’s studies at Bryn Mawr College, a goal that has been given a boost after she was recognized by the Chester branch of the NAACP and awarded a scholarship to the college of her choice.

She is already active in several student organizations at Chester, and is currently vice president of the student government. She also hosts culture days at Chester, where she represents her home nation with food and clothing.

“Students were curious about other countries,” Ekwale said. “Most of them were willing to try my mother’s food — I had the best food around.”

Ekwale, who said she also received a quality education in Africa, is working on changing people’s preconceived stereotypes about the continent.

“When I got here people had stereotypes about Africa; they thought we all lived in jungles,” she said. “I just try to keep people informed, to make sure there’s not an ignorance of other cultures.”

Read more about Ekwale’s plans in the Daily Times by clicking here.