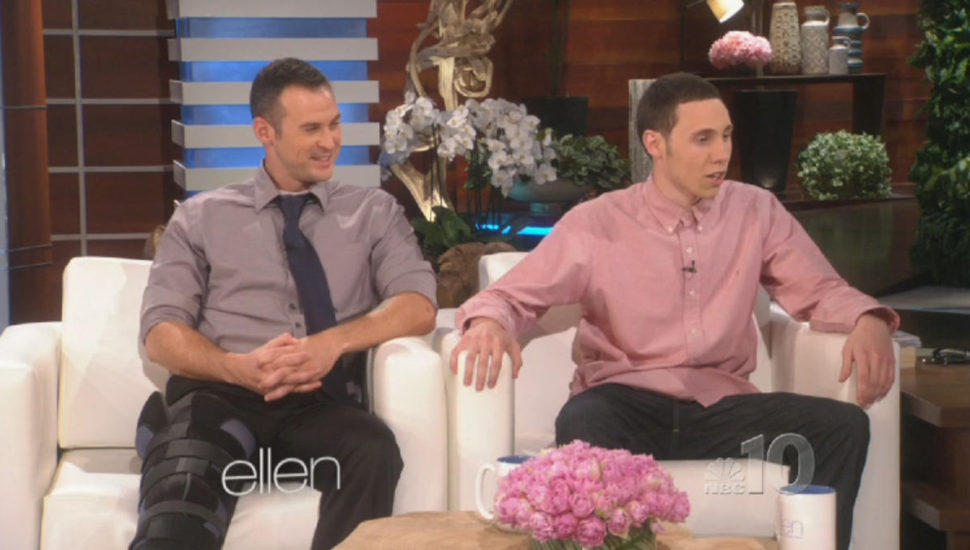 After Joseph Chambers, right, saved Officer Mark Kimsey from a burning car, the pair went on Ellen to discuss the experience. Image via NBC10.

It was the instinct of a boy who grew up playing cops and robbers and serving as a junior firefighter that thrust 17-year-old Joseph Chambers onto the scene of a burning Philadelphia police car in 2014.

And it’s the heart of a hero that has taken him from saving that cop’s life to becoming a policeman himself.

Chambers was sworn in by the Folcroft Borough Police Department last June, and the man holding the Bible for his oath was none other than Officer Mark Kimsey, whom Chambers pulled from that burning squad car two years earlier, according to a Daily Times report by Rose Quinn.

The Ridley High School and Delaware County Municipal Police Academy alum is now a part-time police officer in both Folcroft and Ridley.

“I’ve always wanted to be a cop since I saw my first police car,” Chambers said. “I always thought they were just so cool. They were people I really looked up to.”

Now that esteem is mutual.

“Whereas some may rush to their own safety or stand by and wait for others to help, Joseph Chambers displayed heroic action, ultimately saving a life; and whereas, the bravery of a young hero like this shines as a bright inspiration to all,” the Delaware County Council stated.

Chambers will even be honored as a groomsman in Officer Kimsey’s wedding on June 24.