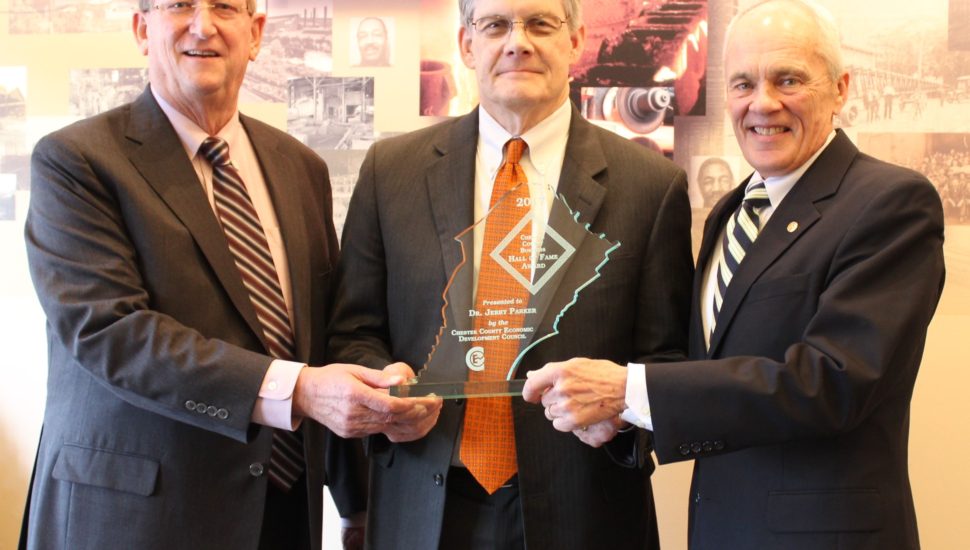 Three months before he is set to retire, Delaware County Community College President Dr. Jerry Parker received a crowning accolade for his decades of service when he was inducted into the Chester County Business Hall of Fame at the Chester County Economic Development Council’s Business Achievement Awards dinner.

Before more than 400 attendees at the Phoenixville Foundry, Parker – who will retire July 1 after 40 years at the college, including 14 years as president – received the award for his exemplary leadership and vision in forging lasting relationships between the college and business owners and manufacturers in Chester County.

“Our county has evolved into one of the most high-tech in the state, and Dr. Jerry Parker and Delaware County Community College were integral to that achievement,” said Gary Smith, president and chief executive officer of the CCEDC.

Over the years, the college has solidified its role in Chester County, spending millions of dollars on state-of-the-art education and training facilities and fostering strong relationships with manufacturers through trade and industry organizations.

Today, of the college’s nine campuses, six are in Chester County, including the Downingtown Campus, an anchor facility which the college owns and operates that is currently undergoing a multimillion-dollar renovation.

“Tonight’s award is a real affirmation, by the county, of Delaware County Community College’s acceptance as Chester County’s community college,” Dr. Parker said. “And our role, as you’ve heard, is only growing as the 21st-century workforce requires higher and higher levels of education and skills, even for entry-level jobs.