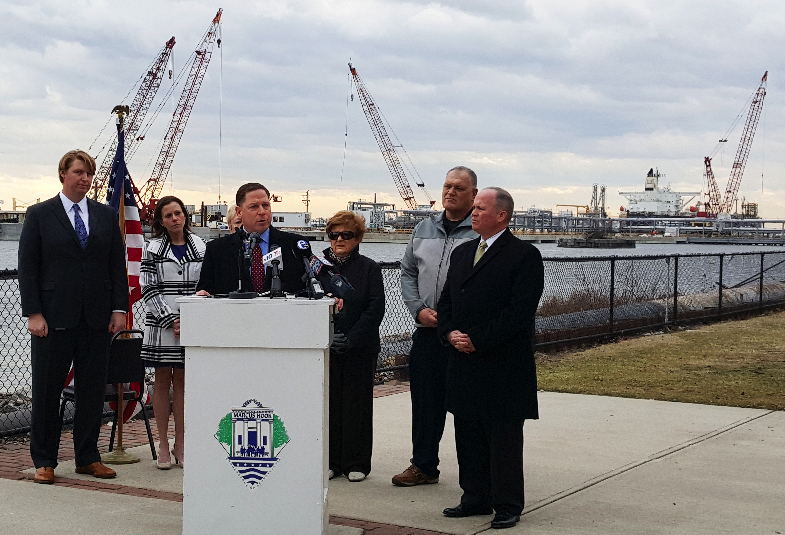 The influx of natural resources into Sunoco Logistics’ facility has created the demand for these new jobs and a new energy economy. As you just heard these are well paying and life-sustaining jobs.

These are 20 new jobs available for some of our qualified and skilled workers right here in the county. These jobs are paying $80, 000. They are well above the average of the Median Household income in the Commonwealth.

Once these new positions are filled, the full-time workforce at Marcus Hook will exceed 200 employees with a total annual payroll of $16 million dollars.

That’s in addition to the 2,200 construction workers rebuilding the Marcus Hook Industrial Complex every day, these are good paying building trade’s workers and are part of the estimated 15,000 jobs supported annually during the construction of the Mariner East projects in the region.

I understand the importance of these jobs, I am a steamfitter by trade and there are millions of hours worked each year by tradesmen at the Sunoco Logistics plant.

This is great news for Delaware County’s economy.  Every new job created at the Industrial Complex is a step toward reaching our county’s full economic potential.

Just five years ago the future of our waterfront looked bleak. Refineries were closing, people were losing jobs and nearby businesses were also suffering. Delaware County Council was determined to be proactive and to identify potential industries and attract new businesses to the waterfront.

In March 2012 Delaware County Council requested that the Industrial Development Authority (IDA) conduct an analysis of what uses would be best for the former Marcus Hook refinery. The goal was to be proactive and bring business and jobs back to Marcus Hook.

The findings outlined seven best uses for the site; five were energy-based alternatives and two were Marcellus Shale chemical-based.

In February 2015 Council toured Sunoco Logistics and we were literally energized to see that almost 3 years after the study – that the recommendations had become a reality.

Sunoco Logistics was making major enhancements to existing infrastructure at the site and was creating new opportunities for industrial development.

After that visit back in February 2015 Delaware County Council asked the IDA to conduct a second phase of that study.  IDA updated the study to re-assess the viability and requirements of re-use options for the 780-acre site.

The study found a significant increase in natural gas liquids (NGLs) coming from the Marcellus and Utica shale regions, transported by the Mariner East pipeline.  The low-cost, shale-gas feedstocks available to the US chemical industry have given the US a competitive edge in markets that use natural gas

Sunoco has implemented recommendations from that 2nd study and today the Marcus Hook Industrial Complex and abutting assets have emerged as symbols of economic promise and industrial revitalization.

We know that the growth at the Marcus Hook Industrial Complex is driven by the Mariner East infrastructure projects. It began in December 2014 with the startup of the Mariner East 1 pipeline system.

Mariner East 1 now transports approximately 70,000 barrels of propane and ethane daily from the Marcellus Shale area of Western Pennsylvania to Marcus Hook for processing, storage and distribution to local, regional and international markets.

The future of Sunoco Logistics, which includes these 20 new jobs, and other new positions at the Marcus Hook Industrial Complex, await the completion of the Mariner East 2 pipeline project.

This project is awaiting approval of environmental permits from the Pennsylvania Department of Environmental Protection.  If approved, Mariner East 2 will transport an estimated 270,000 barrels of propane and butane a day, nearly quadrupling the amount of resources flowing into southeastern Pennsylvania.

The rebirth of the Marcus Hook site not only means growth in Marcus Hook, but for all of Delaware County.

We know there is an emerging global interest in the energy marketplace and Delaware County is positioned to be a major player. This is a huge step in the revitalization of our waterfront.

The addition of these jobs announced today exemplifies the continued growth and rebirth of the Marcus Hook facility, an emerging energy hub in the United States, and County Council’s commitment to seeing this growth continue.

Pa. Ranks Among States That Could Most Benefit from Easy-Breezy Energy Source

As EVs Grow, Convenience Store Get into the Charging Business