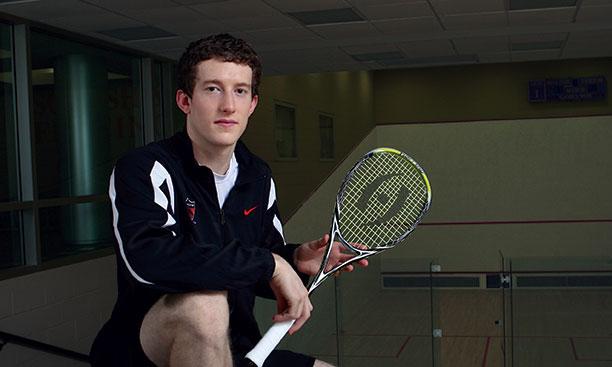 Photo of Todd Harrity as an undergrad at Princeton courtesy of Beverly Schaefer.

Surrounded by athletic parents and the four walls of a squash court, Todd Harrity grew up loving the intensity of the indoor racket sport, and he learned to play a calculatingly patient game that led him to the Professional Squash Association World Tour.

“One thing just led to the next,” Harrity said in a Princeton Alumni Weekly report by Alfred Miller. “I played because I enjoyed it; that was the most important thing. I liked improving. I liked just finding ways to improve.”

That improvement was fostered from an early age by the Bryn Mawr native’s parents, by the Merion Cricket Club in Haverford during his high school years at Episcopal Academy, and by teammates and mentors at Princeton.

“He has an amazing focus when he’s on the court,” childhood friend and teammate Steve Harrington said. “It’s like playing a computer for some guys.”

Now the Wayne resident enjoys a No. 51 world ranking — and No. 1 in the United States — going into this week’s start of the J.P. Morgan Tournament of Champions at Grand Central Terminal in New York City.

His latest volley of improvement has been in his offense.

“You’re always trying to push that barrier, and be brave, and go for it, and commit yourself because you want to improve and be better,” he said. “You can’t just play it so safe all the time.”