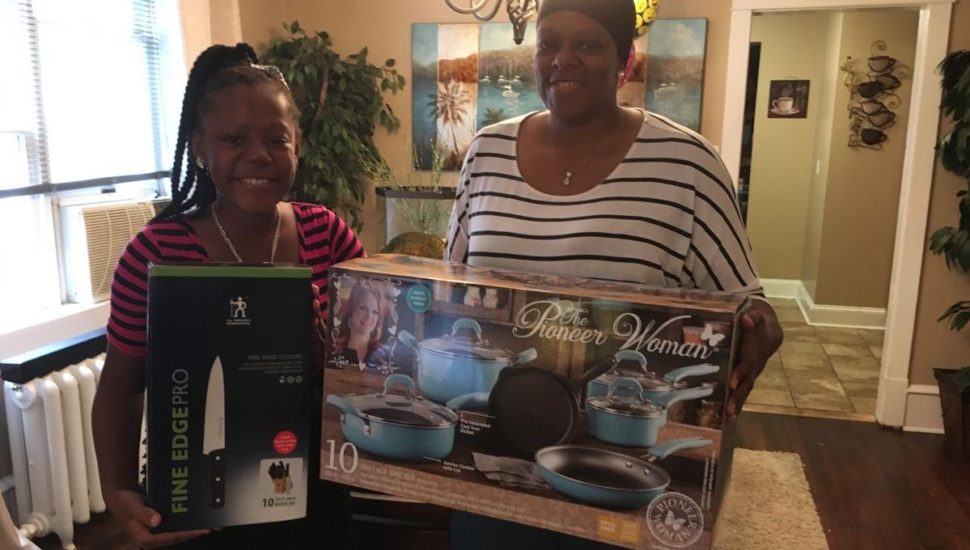 Tavia Isaac and her mother Crystal display the knives and cookware given to her by Chester Mayor Thaddeus Kirkland and City Council for her win on Chopped Junior. Photo courtesy of Peg DeGrassa, Digital First Media.

Tavia Isaac, the 12-year-old native of Chester who came out victorious in the Food Network’s Chopped Junior, is enjoying the fame that has followed her triumph, writes Peg DeGrassa for Main Line Media News.

Isaac won first place in the spin-off of the hit cooking show Chopped, which has young chefs between the ages of 9 and 15 create dishes from mystery baskets of ingredients. Isaac’s winning meal included a butter-roasted cornish hen with sauteed vegetables.

Despite having filmed the show in April, the young chef was unable to tell anyone she had won until after the finale aired in September. According to Isaac, her life has been a whirlwind of activity since then.

This includes being presented with a proclamation by Senator Tom Killion, and receiving a set of knives and Pioneer Woman cookware from Chester Mayor Thaddeus Kirkland and other members of Chester City Council.

“Everywhere we go, people recognize her,” said Tavia’s mother Crystal. “They want to take a picture with her, shower her with questions, and even ask for her autograph.”

Weekend Wanderer: When Mom Stands You Up for Dinner

They Faced Life's Challenges Together and Found Love and Fun

She Opened Her Heart and Lansdowne Home to Children