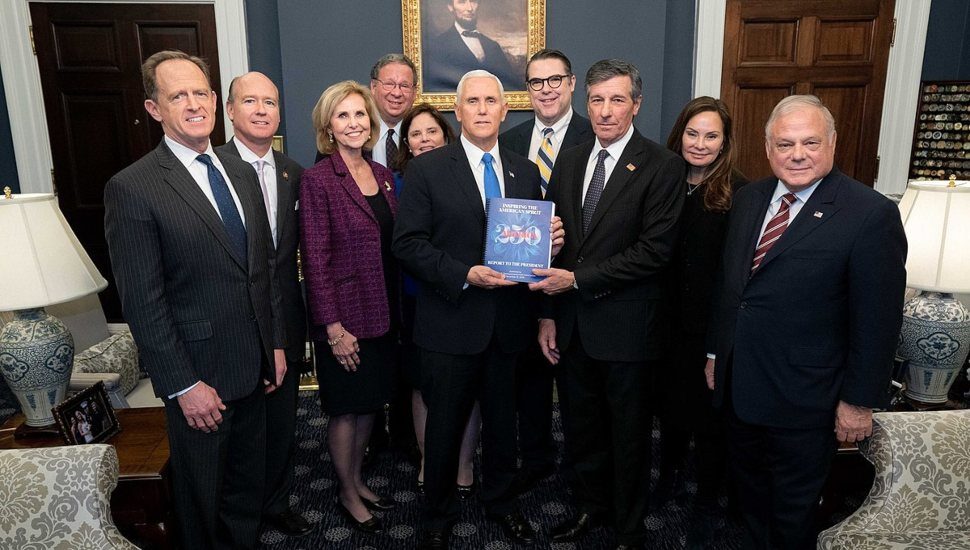 Image via The White House.
Members of the Semiquincentennial Commission present then Vice President Mike Pence the commission's report on Jan. 15, 2020. DiLella is eighth from left.

President Biden has replaced Daniel DiLella, president and CEO of Equus Capital of Newtown Square, as chairman of the federal Semiquincentennial Commission set up to plan the nation’s 250th anniversary of American independence, writes Jeff Bravin for The Wall Street Journal

Replacing him is former U.S. Treasurer Rosie Rios.  No reason or public comment was given for the change in chairmanship.

Congress created the Commission in 2016. It is comprised of eight lawmakers and 16 private citizens, appointed equally from both Parties by congressional leaders.

In 2018, then President Donald Trump named DiLella as chairman and Biden renewed his tenure.

His chairmanship became untenable after the Wall Street Journal reported internal disputes within the America250 Foundation behind the Commission.

Then four female former executives filed a discrimination suit against the Commission and two affiliated nonprofits.

“I deeply appreciate Dan DiLella’s leadership and that he will remain a vital part of the Commission,” Rios stated in a release from the America250 Foundation.

For now, DiLella continues to serve as chairman of the America250 Foundation.