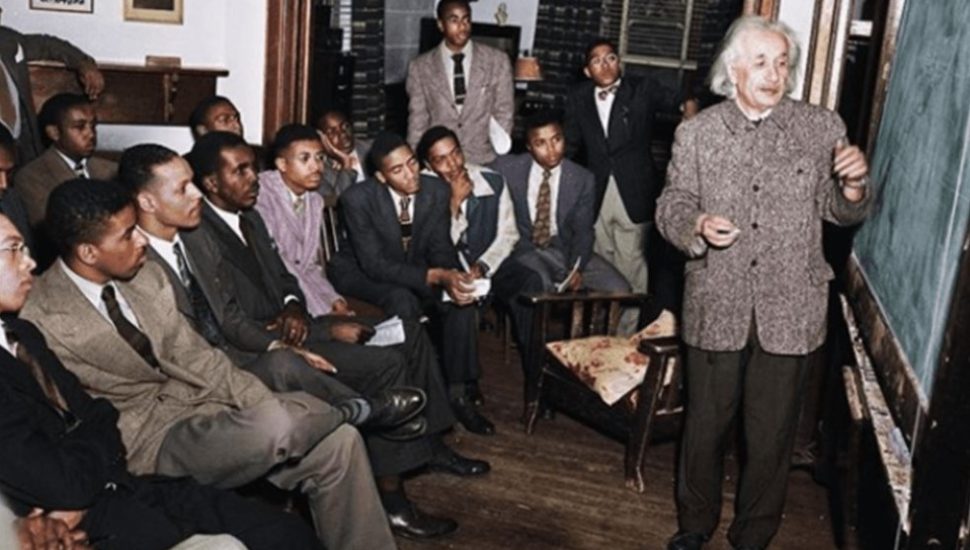 It’s the alma mater of Thurgood Marshall, the first African-American Supreme Court Justice, and Langston Hughes, the prolific poet who led the Harlem Renaissance. Both figures are so central to American history that they’ve been honored with commemorative stamps by the U.S. Postal Service.

The Nobel Prize-winning physicist who discovered the theory of relativity visited the university in 1946, and no, it wasn’t because he confused the Oxford in Pennsylvania with the Oxford in England. He was there to accept an honorary degree and to speak to and take questions from students during a classroom visit.

Einstein was averse to accepting honorary degrees from universities, calling them “ostentatious,” but he accepted Lincoln’s invitation, “clearly intending to send a message to a wider audience.”

Einstein was one of hundreds of thousands of Jews who fled Germany during Hitler’s reign. Having been persecuted for his faith, he understood the negative impact of oppression and was there to speak out against racism.

“There is … a somber point in the social outlook of Americans,” Einstein said. “Their sense of equality and human dignity is mainly limited to men of white skins. Even among these, there are prejudices of which I, as a Jew, am dearly conscious; but they are unimportant in comparison with the attitude of ‘Whites’ toward their fellow-citizens of darker complexion. … The more I feel an American, the more this situation pains me. I can escape the feeling of complicity in it only by speaking out.”

Dedicated Foster Father, Maintenance Man at Lincoln University for 50 Years Has No Plans to Retire