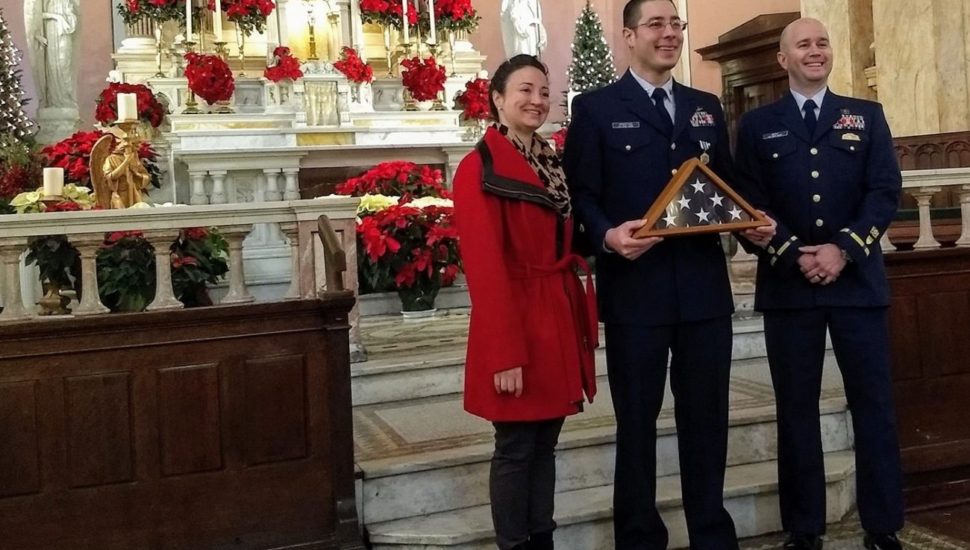 Michael Anastasi (center) stands in the National Shrine of St. Rita during a ceremony marking his retirement as a first class petty officer of the U.S. Coast Guard, along with his wife Tara and Coast Guard Chief Warrant Officer Michael West. Image via catholicphilly.com.

A special ceremony Jan. 2 at the National Shrine of St. Rita of Cascia on South Broad Street marked the retirement of  First Class Petty Officer Michael Anastasi from the U.S. Coast Guard, but kicked off his career as director of security for the Shrine, writes Lou Baldwin for catholicphilly.com.

“I have given the first 20 years of my (working) life to the world, and now I will give the rest to God,” Anastasi said.

Anastasi , an Upland native, emembers his dad bringing him to Philadelphia and the Shrine of St. Rita when he was a kid.

He joined the Coast Guard not long after his graduation from Ridley High School.

He was stationed in California, Mississippi, Michigan, Detroit, Boston and Washington, D.C.

A Catholic from birth, wherever he went his faith went with him.

He became an altar server in Oakland and took on other roles over time. In Washington, he was a volunteer guard at the Basilica of the National Shrine of the Immaculate Conception.

Anastasi also joined the Knights of Columbus and is a fourth degree knight.

Read more about Michael Anastasi and his new role at the St. Rita Shrine here.