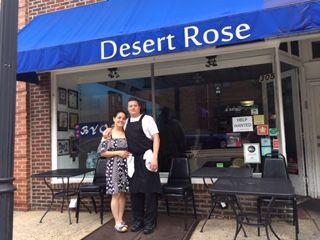 Image via Susan Serbin, Media News Group. Jason McHugh and his wife, Natalie, outside their Desert Rose restaurant in Media.

Well known borough chef/owner Jason McHugh decided to close his Desert Rose restaurant on Sundays to have more time with his family. So what did he do on Father’s Day? McHugh saved a life, writes Susan Serbin for the Daily Times.

McHugh, his wife and their boys joined friends at his sister’s home in Middletown.

“We’d probably been there about 15 or 20 minutes when I saw this little girl go in. She seemed to be after a ball by the edge of the pool and just fell,” said McHugh. “I jumped in and saw a white diaper, grabbed it and pulled her out. The next thing I remember is handing her to the mom. It all couldn’t have taken more than a minute.”

The 14-month old toddler appeared not to have any ill-effects and was laughing and smiling shortly after.

McHugh’s action wasn’t accidental. His family bought a home with a pool just over a year ago.

“When we moved in, my mom strongly stressed safety around the pool,” he said. “Those safety practices became second nature to us. I’m hypersensitive about it now, with my two kids,” he said.