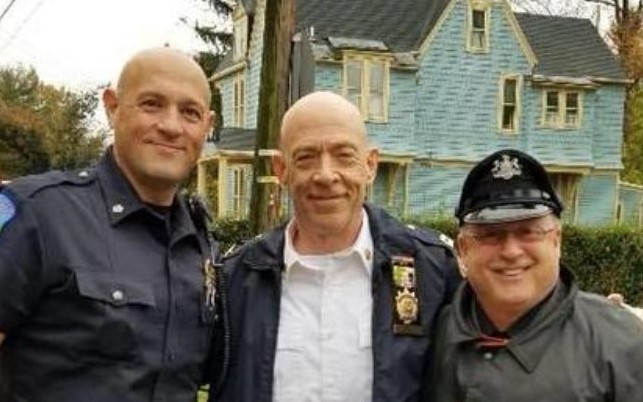 Last week, Hollywood returned to Ridley Park for a day as production trucks arrived on Henderson Avenue to film scenes for the new movie 17 Bridges, according to a report from the Daily Times.

The movie stars Chadwick Boseman of Black Panther fame and Oscar winner J.K. Simmons and tells the story of a disgraced New York City police detective who gets a chance at redemption.

Simmons was spotted on site. He was happy to pose for an impromptu photo with Ridley Park Patrolman Frank D’Ambrosio and Sargent Jim Nasella from the Ridley Park Police Department.

The home base for the production crew was set up at the home of Paul and Michele Mattus, while the lunch tent was at the corner of Poplar Walk and Henderson Avenue.

The film started shooting in Philadelphia on Sept 24.

This isn’t Ridley Park’s first experience Hollywood. Two other major motion pictures were shot on location there, including Clean and Sober in 1988 and Silver Linings Playbook in 2012.

Read more about 17 Bridges in the Daily Times by clicking here.