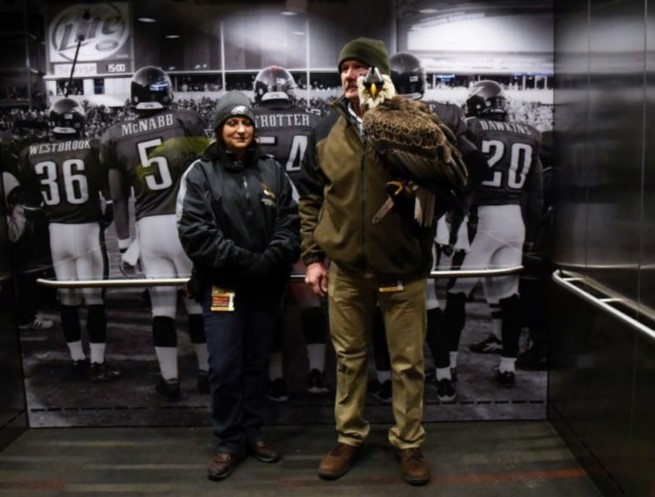 Image of Challenger riding an elevator to the upper deck at Lincoln Financial Field via The Washington Post.

A bald eagle named Challenger elicited a huge roar as he soared over Lincoln Financial Field during the national anthem before the Philadelphia Eagles’ playoff win against the Atlanta Falcons, writes Samantha Drake for The Washington Post.

“Challenger is an uplifting part of our game-day experience,” said Anne Gordon, senior vice president for the Eagles.

The 28-year-old rescue bird is in high demand. He has performed at more than 350 public events over the last two decades. These include 80 NFL regular season games, three NFL Pro Bowls, the College Football Playoff Championship, and 11 World Series games. He also wowed audiences at dozens of Major League Baseball games and the Indianapolis 500.

The bird that was trained to free-fly to the national anthem does not just perform at sports events. He was also there when bald eagles were removed from the endangered species list 11 years ago and flew during concerts held after George W. Bush’s and Barack Obama’s first inaugurations.

“We don’t pick between Democrats and Republicans,” said Al Cecere, Challenger’s trainer and the president and chief executive of the American Eagle Foundation. “Challenger represents all Americans.”

Read more about Challenger in The Washington Post by clicking here.