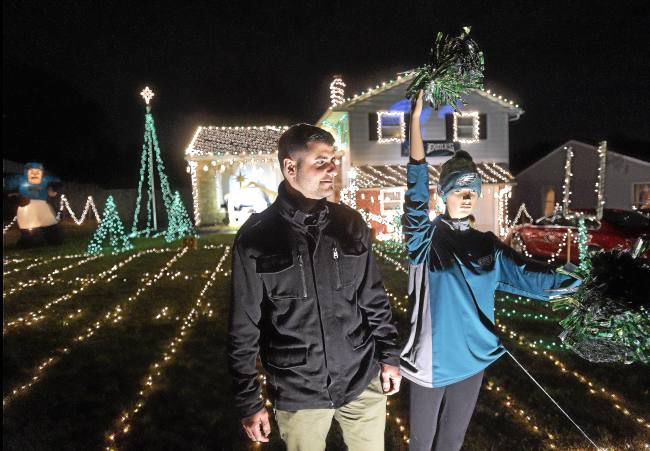 Steve Reynolds is known around Marple for his home’s elaborate Christmas decorations, and this year, he has raised the bar even higher, writes Pete Bannan for the Delaware County News Network.

Reynolds decided to pay homage to the Eagles’ successful season by turning his home on South New Ardmore Avenue into a celebration of the team.

“We do a Christmas display every year, but this year, I decided to do an Eagles theme,” Reynolds said, noting that the decorations include “a fully lined playing field with PVC goalposts, hash marks, and touchdown pylons.”

Reynolds is a true football aficionado. He played both offense and defense during his years at Marple Newtown High School, and is currently president of the Marple Jr. Tigers football and cheerleading squads. He’s also a commentator for the Tigers Radio Network.

It took Reynolds and his brothers three weekends to finish the display. Normally, he waits until December to do it, but he did it earlier this year to celebrate the Eagles’ success.

“We hope to keep it up into February for the Super Bowl,” he said. “I want to be the Clark Griswold of Delaware County.”

Read more about the display from Delaware County News Network by clicking here.

Delco Swim Clubs Doing Well Going Into the Summer of 2022