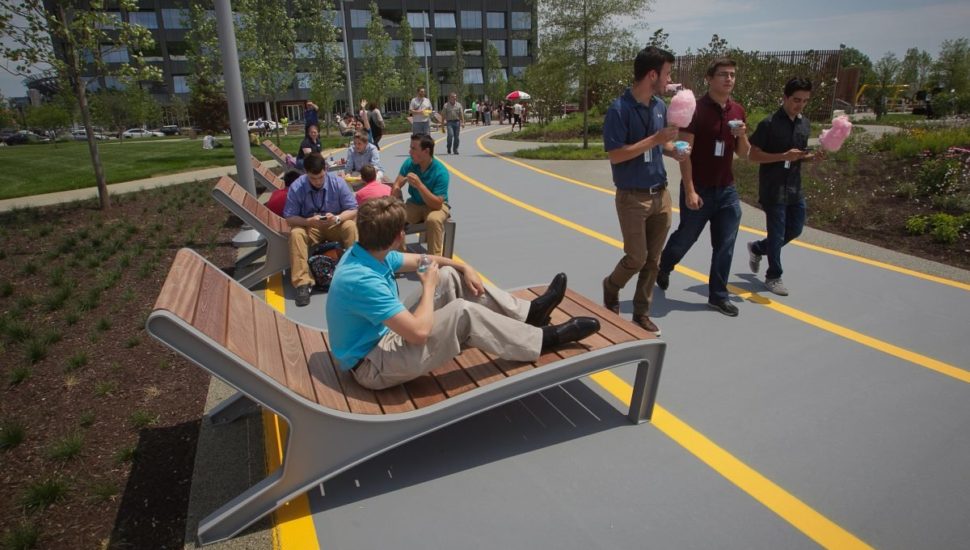 Philadelphia is shining up its resume as Amazon searches for a second headquarters, and both Liberty Property Trust and King of Prussia offer possibilities. Image of workers on break at the Navy Yard, one of the potential sites, via Alejandro Alvarez, Philadelphia Inquirer.

America’s go-to online retailer could really click with a second headquarters in Philadelphia, and both Malvern’s Liberty Property Trust and King of Prussia are in the early conversations about pitching Philly’s virtues, as Amazon looks to expand its physical presence.

Liberty’s vast Navy Yard development is one of three frontrunners with enough space to host what could become a corporate hub for Amazon to the tune of eight million square feet. That’s “equal to about 6.5 Comcast Center towers,” according to a Philadelphia Inquirer report by Jacob Adelman.

And King of Prussia offers an attractive satellite destination if the Seattle company wants to spread out across the metro.

Other standout locations include 14 acres at Brandywine Realty Trust’s Schuylkill Yards and 27 acres at uCity Square.

“The Navy Yard is expansive,” former Commerce Director James Cuorato said of Liberty’s 1,200 acres. “You are dealing with more of a blank slate.”

Ultimately, the Philadelphia Industrial Development Corp. and Commerce Department will make the pitch to Amazon.

“We believe the first step of this process is about Philadelphia advancing as a city that fits Amazon’s needs, not about a specific site,” said Commerce spokeswoman Lauren Cox.

The pervasive e-retailer called for proposals earlier this month, and responses are due Oct. 19. Amazon aims to select a site for its $5 billion second headquarters sometime in 2018. Preliminary figures for the chosen destination include investments in up to 50,000 full-time employees earning six figures on average over 10 to 15 years.

Read more about the Philly-area possibilities for hosting Amazon and its second headquarters in the Philadelphia Inquirer here.